The Streets of San Francisco

San Francisco, perhaps more than any other city I have visited, feels moulded by the peculiar geography of its unlikely location. The topography dominates; the impossibly steep streets of movie fame, a huge bridge, a sinister rock in the middle of a bay.

I've seen Bullitt and The Rock and those posters they used to sell in Athena, so I know all about the streets. I'm driving in on 101, which is actually Lombard Street. And I start going up. It is ridiculous. I can't see over the bonnet (hood) of the car, it's so steep. And at the apex - a stop sign. Like I had a choice! The road levels out, then it's onwards and upwards once more. At the very top, with North Beach (there's no beach) stretching out, the road switches back upon itself amidst the vibrant flowers that line its path. At the foot of this bizarre road, hoards of tourists block your way with their cameras. 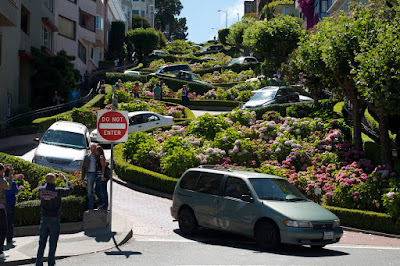 The next day I ride the cable car across town; the most archaic form of transport surviving in a modern city. Although they're used mainly by tourists, plenty of commuters hop on, and the conductors, whilst hamming it up for the foreigners, omit to request their fares. The car is controlled by hand, no mean feat on some of the slopes - the guy driving ours was hanging off the lever at times. Impossible to imagine Transport for London allowing this kind of thing to continue - you definitely can't get on one in a wheelchair.

The slopes aren't everywhere - downtown is fairly flat, rising to a few stiff peaks here and there. The streets and city blend together, but it's a pretty blend. Flowers add splashes of colour to the scene, and little alleyways disappear between the office blocks. People have that slight edge to their movement that comes with living in a city. They drive a little more aggressively and walk with purpose. Occasionally you might catch them kicking back for a minute or two, but somehow, when they do, they seem to just blend into their surroundings. 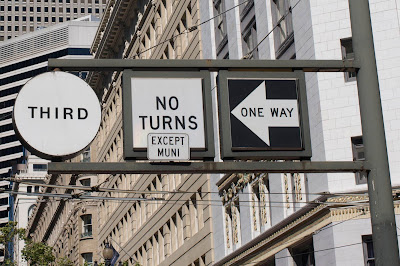 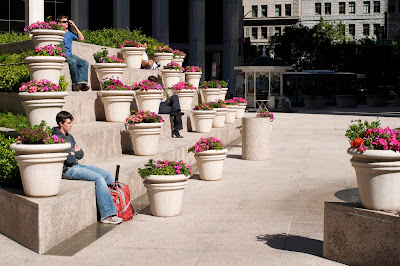 The waterfront is a busy stretch, from the ferry building that houses a farmers' market, all the way up to the tourist hell of Fisherman's Wharf. The east stretch is calm and peaceful, aside from the joggers, but the northern part is like Leicester Square. There are discount camera stores, shops selling tatty souvenirs and guys doing the old gold or silver robot routine. I catch a few of them having a break - upon closer inspection they turn out to be three big black brothers, and relaxing over a coffee they're shouting to one another about mother fu*kers, hoes and bitches. It's hilarious. They spot me taking their picture and dish out some vintage gangster rap abuse. 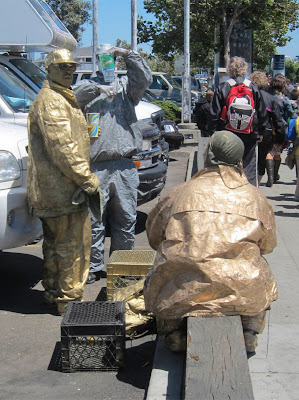 I like it here. There's an energy and a vivacity emanating from the streets. And when the daily sea fret clears, normally around lunchtime, it is a truly beautiful place to be. The city falls neatly into its little neighbourhoods. In the quieter ones, the people are really friendly and smile at one another on the street (or maybe they just like the dog I'm walking). The architecture is stunning at times, it has a real Regency feel, and with some of those slopes, well it's almost like Hove, actually. 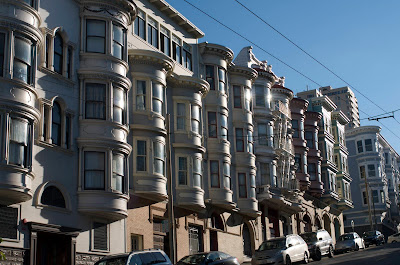 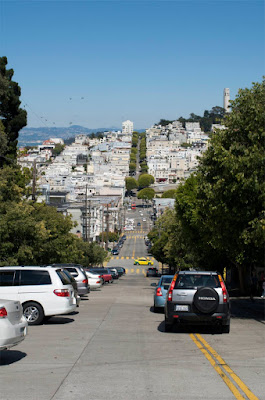 On my first morning I am taken aback. A siren sounds out over the city and the scariest, most apocalyptic voice you can imagine booms out: "THIS IS A TEST. THIS IS A TEST OF THE EARLY WARNING SYSTEM". I imagine they're shooting some disaster movie, and then I remember. The city shaped by the land it stands on, stands on shaky ground. The San Andreas fault runs directly beneath, a kind of inverted Sword of Damacles hanging under the whole show. Maybe the Streets of San Francisco are not so safe after all.
Posted by Joe at 09:23