Repetition of superlatives only serves to lessen their impact. Take the word Grand. It's used all the time (in Ireland, in every sentence, to denote that something is tolerable). Occasionally it gets bumped up a rung or two; a grand old house, a grand staircase, grand piano. The Grand Canyon? Well, it'll be nice enough, and bigger than your average canyon, to be sure.

It's big all right - 277 miles long, with an average depth of 4,000 feet and 15 miles across at its widest point, way beyond the span of any word I can think of. As I approach and gain a first glimpse I am truly taken aback. 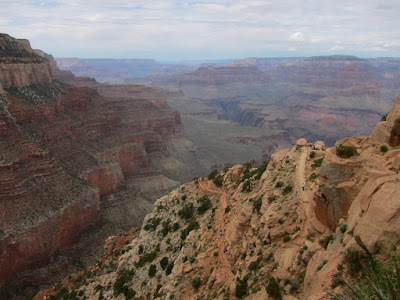 As a visual spectacle it is quite simply awesome. It is so big, colourful, and wonderfully sculpted. Cloud shadows dance across its peaks and troughs, and the sun teases it with bursts of life and colour. Old trees line the rim, some living, some long dead. There's a lot of dust and pollution sadly, but rainclouds clear the air and gather threateningly overhead. It's too late for me - I'm already halfway down.

I hiked down the South Kaibab trail for an hour, and it took about one and a half to get back up, by which time it was mercifully pissing with rain and I took a well earned nap in the car. When I woke it was still raining, so I took advantage of the trepidation of the United Nations of tourists to stride out along the rim and enjoy a little solitude.

Sadly the fat tourist laden shuttle buses whizz by, but the clouds are beginning to abate. I've hiked for a few hours now, so the initial visual impact has diffused and I've kind of got used to the place. But before long a glorious twilight is filling the canyon. Suddenly it's magic comes alive again, and I spend a long time just staring over the edge, completely mesmerised by its loneliness and beauty. 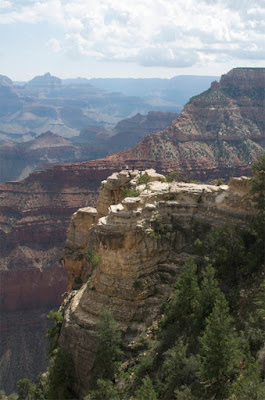 But perhaps most impressive of all, it is just so unimaginably old. Experts agree that it's somewhere between 6 and 17 million years (experts, pah!) since the Colorado River first began gorging out a canyon as the land around it lifted. But the rocks had been forming for almost half the life of the Earth. The water cut through the geological history of our planet, like an arborist boring into an old tree, and left the results, in all their splendour, free for all to see. 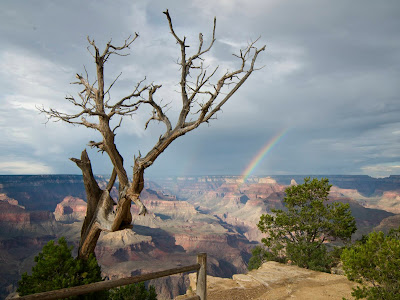 You cannot improve on it. The ages have been at work on it, and man can only mar it