Right, I'm back on the road. Sunday morning I roar past the miles of cars queueing up to get into Yosemite and don't stop until I hit the coast. Monterey, to be precise.

I haven't showered in days, I stink, and my feet look like Mowgli's would had he just returned from Glastonbury. I check into the Monterey Hotel, whose wi-fi network is called MoHo, which amuses me briefly before I spend the next hour scrubbing dirt from my pores. 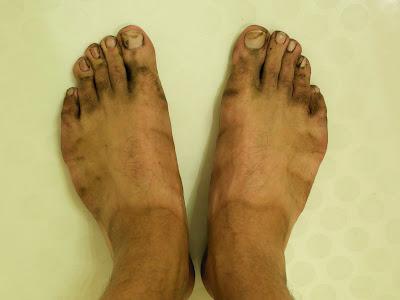 Next morning I go for a stroll along the wharf, and head up to Cannery Row, the setting of the Steinbeck novel (they changed the name from its original one to cash in on the notoriety). Suddenly I am struck by an ungodly stench. Large colonies of sealions are basking in the sun, and they smell like a load of unwashed dogs. Disgusting. I quicken my pace.

I wish I hadn't, because Cannery Row is a shameless, tacky, cheap experience that I would sooner forget. Everything is faux. The Cannery Row Brewing Company is housed in an old brick building, the cracked and peeling white letters spelling out its name, adding Established 2010 at the end. I'd be getting on the phone to Dulux for a refund. Every other company has Steinbeck in its name. The Steinbeck Plaza, a collection of bargain bucket souvenir shops peddling sub standard merchandise, would surely have the great man spinning in his sardine can.

I press on, heading further west to the exclusive Pebble Beach area. Through the open car window I hear the uniquely glorious sound of a golf ball being driven off the tee, and my mind flashes to my clubs, gathering dust in the garage back home. 17 mile drive is a toll road that loops around the golf courses - ten bucks to drive on it but you can knock it off the check if you stop to eat. I choose to lunch at the Stillwater Bar and Grill that overlooks the 18th green of the course that staged this year's US Open. The food was average, the view better. 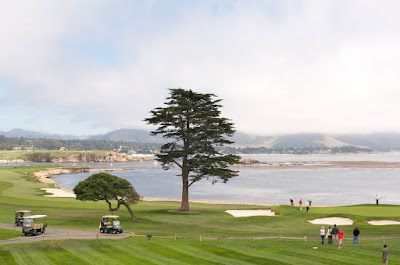 The unmistakable smell of money continues in the heady little cluster of old cottages, antique shops, art galleries and jewellers called Carmel. The contrast with Cannery Row couldn't be any clearer. If money is indeed the root of evil, then there must be some bad ass people living in this little town. I would still prefer it over the ostentatious tat of the former any day of the week though. I speak to two ladies in consecutive shops, both with incurably posh English accents that their respective twenty years in California have failed to tarnish. Evil to the core.

Having narrowly escaped Carmel without shedding a large amount of cash on an exceptional photograph by a guy named Robert Taylor, I hit the road once more. The stretch of highway south of Carmel is the famous Big Sur, where 5,000 foot mountains collapse into the sea. There is NOTHING on this stretch of road. Towns marked on the map are in fact single buildings. It is wild, remote and that fog is rolling in again. 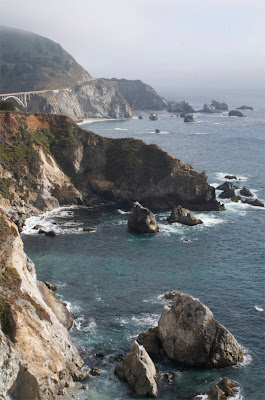 It's getting late, I have no chance of a campsite, so the old hotel budget is going to get a stretching again, if only I can find one. In my rear view mirror I see a great sky developing. When I finally get a chance to pull over, the mist encroaches, and the sun is just a bleached light trying to shine through the cloud. I think I might prefer it that way. 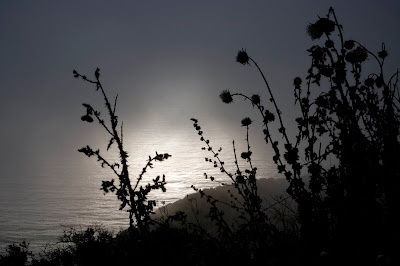