It's not the only reason I stopped here, but it is one of them: Del Mar has a famous racetrack.

Some of you may not know, but up until a couple of years ago I lived and breathed horse racing: a bookmaker by trade, and a gambler. Since I quit (quitting while you're ahead is not the same as quitting) I've had one proper bet on a horse, and been racing once. I still like it, and I'll always love going, but if you want to bet the ponies and make money, it has to be all or nothing. It was all for long enough, so now it's nothing.

Never one to let an old habit slip, I miss the first race. And the second actually, thanks to some vague directions from an old lady with a German accent who I really should have known to ignore. I apply some trusted logic to the third, but it doesn't quite pay off. The horse I backed bursts out of the gate, leads at a ridiculous pace, and fades in the straight. Not off a yard (ie not trying). A great gambler once said that the secret to making money was knowing something no-one else knows. A truer word was never spoken. 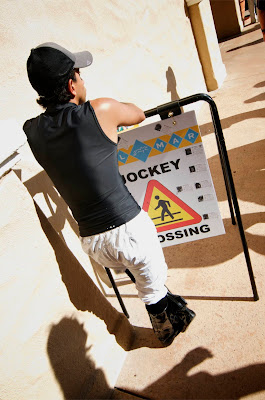 The people around me seem to know an awful lot though. Their in race commentaries and excited urgings are hilarious. Come on you asshole. Don't get boxed in. Use your stick. Come off the rail. I watch them cheer for horses that can't possibly win, and keep cheering for the leader as he gets mopped up half a furlong out. I shouldn't speak too detrimentally of these people - I made a lot of money out of them over the years. But they are idiots. 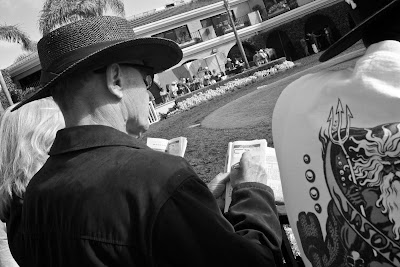 I was hanging around the parade ring taking pictures when two little kids took up position next to me with their grandad. The boy looked at me and said "We just won some money." I congratulated him. His sister, probably about six years old, told him "We should have bet more. Five bucks isn't bad, but we could have won a hundred." Then she turned to her grandad and added "Yelling really does work though." She's not wrong, I definitely called a few home in my time. I listen out for what she's backing in the next and follow her in. 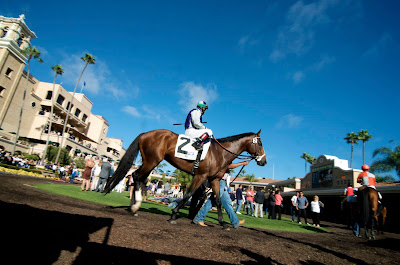 It's more relaxed and informal here than in England. There are less drunks and more kids. It is also more sterile. Del Mar claim to be "Where the Turf meets the Surf" but most of the races are run on the Polytrack and the rest of the place is concrete. And I can't see the beach. I'd take an afternoon at York, Chester or Goodwood over this place any day of the week. They have managed to replicate a few British practices though; a bottle of water costs four bucks. 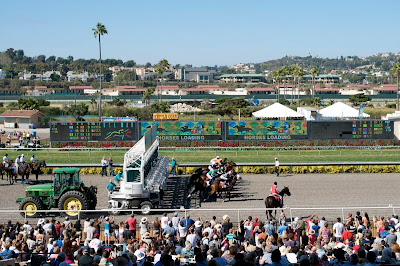 Having done my money in the first couple of heats I revert to the modus operandi of every clueless punter and back Victory Joe. They should have called him something else. I'm sixty bucks down at this point, and I realise that in three races I have lost about one twentieth of what would have been a decent bet for me in the past, and my heart rate was still cranked up a dozen notches or so.

No wonder I used to shout so much. Good job I quit while I was ahead.
Posted by Joe at 19:45