Travelling on your own is great; meeting new people is great. But every now and then, you can't beat seeing a familiar face. I've been staying with my mate Blom and his girlfriend Rachael. I've felt at home, and among friends, and what a great feeling that is. I even hit it off with their dog, Jackson: 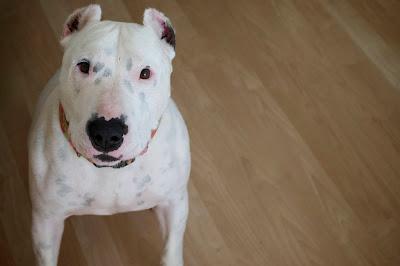 Maybe it's because he's named after a Johnny Cash song. Or maybe it's because he has a dog door that he saunters in and out of with proud independence. Or it could just be that I'd like anyone who licks the sand off my feet when I get back from the beach.

And that beach, of course, is Huntington Beach, where the sun shines and the girls are unspeakably pretty. I was only going to stay two nights but it ended up being four. To be honest, I'd think about staying here for the rest of my life if I could.

It must be the sun that makes people smile, makes them warm and friendly. As Blom said, every day feels like you're on holiday. As soon as you're not at work, you're down the beach. Once the half million or so extra people who hit town for the US Open at the weekend have cleared out, things revert to their usual, laid back selves. It's busy, but not crowded. 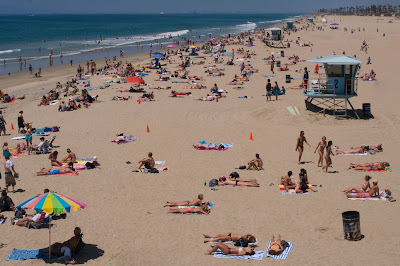 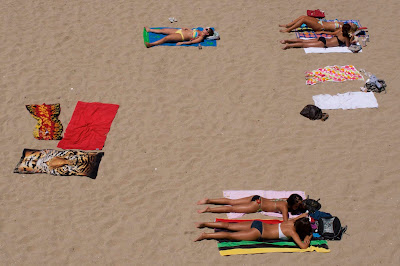 Huntington Beach is the home of mainland surfing in the States. The town has trademarked "Surf City USA" to market themselves, having originally brought Hawaiians over to demonstrate the sport back in the early twentieth century. Most legendary among them was Duke Kahanamoku. In between winning Olympic Golds for swimming, he introduced surfing to Australia and California, on a 16 foot board he made himself from local koa wood. It weighed 114 pounds.

How would you like to stand like a god before the crest of a monster billow, always rushing to the bottom of a hill and never reaching its base, and to come rushing in for a half a mile at express speed, in graceful attitude, of course, until you reach the beach and step easily from the wave to the strand?

Questions like this only have one answer, so yesterday afternoon I decanted myself into a wetsuit and headed out onto the waves for a lesson. My teacher, Big Rich, is a Hawaiian who probably started surfing in the womb. He is passionate, intelligent and a great teacher. But he couldn't possibly have gauged the enormity of the challenge that laid before him yesterday as we strode across the sand with our boards.

We begin on the beach. No getting to the knees here, it's straight up. Fingers on the deck until your feet are set. I practice popping up a few times, and surprise myself by how comfortably I seem to be doing it. We head out into the water. "Surfing is 90% paddling", he tells me. That's a problem right there: I can barely swim. Utilising muscles that evaded my long lost gym sessions, I struggle against the wind chopped waves. Arching my neck up to avoid getting a constant faceful of surf is excruciating, and I'm getting out of breath. "You're having a few stamina issues", Rich helpfully observes.

Despite these problems, I keep fighting. I won't quit, though I would really like to. I catch a wave, and in attempting to pop to my feet immediately forget everything I have just been taught. Since every time I come off I have to paddle back out, this is unbelievably frustrating and I castigate myself with a few choice words. I am getting stressed. There is no harmony between me and the waves. Maybe I need to watch Point Break to brush up on the spiritual side.

I won't lie and say I rode a wave, but I did manage to get to my feet, for about a second, until a combination of an innate lack of balance and the sheer surprise at being there led me to ditch into the surf. It would have been easier in the morning before the wind picked up, and I'd have loved a few more sessions with Rich, who's a great coach, but it's time to skip town. I learnt enough to keep me going though, and I'll be back out there sooner or later - to bite more waves and practice a few cuss words.
Posted by Joe at 12:24