Santa Fe, New Mexico is one of the oldest cities in the United States. A rather pretty little place, its traditional adobe houses, galleries, churches, artists and museums lure the tourists in their droves. There is a singular air about the place; it is distinctly New Mexican. Red chiles hang from every doorway. 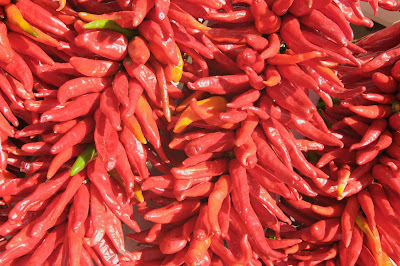 Hot chile peppers in the blistering sun
Perhaps the most intriguing attraction is the Loretta Chapel. The story goes something like this: the chapel was built with no means of getting up to the choir loft. The Sisters of Loretta didn't want to haul their habits up some rickety old ladder, so they prayed to St Joseph, patron saint of carpenters, for a solution. Lo and behold, on the final day of their Novena, a mysterious man appeared at the chapel door offering his services. A few months later, he disappeared without a trace, but not before he'd knocked up a neat spiral staircase that turns through 720º without any obvious means of support. It was proclaimed a miracle (though not an official one). 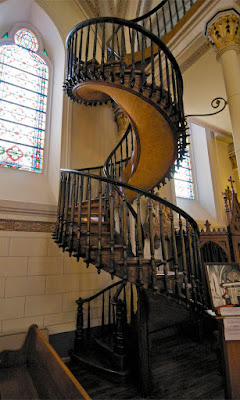 Can you feel it?
I'm not an overly religious person, but I like places of worship and the thoughtful reflection they quietly imbue. So I was rather looking forward to a few peaceful moments looking at this wondrous bit of carpentry and pondering the message behind its mysterious creation. Never mind. The voice booming out of the speakers repeated the story every five minutes over a backtrack of moving choral singing. The only place it moved me was the exit, which is reached via a gift shop selling all manner of borderline blasphemous tat. Luckily the beautiful St Francis Cathedral Basilica a few blocks away offered some respite, with only a modest souvenir shop wedged in the vestibule.

The clear implication is that the mysterious old man was in fact some incarnation of Joseph himself (not me, I'm hopeless with a jigsaw). Because the staircase has no central support, it was considered to be held up by some divine force. This too is nonsense - the innermost piece of wood is coiled so tight that it acts as a support. It's an extremely accomplished piece of carpentry, achieved with very basic tools, and by soaking the wood in tubs of hot water. All that glitters is not gold.

I am exacerbating my cynicism, not just for comic effect, but because the packaging of this beautiful chapel invites little else. Of course all these tales are complete bunk, but at least let them speak for themselves and don't turn them into a shameless money spinner.

The rest of Santa Fe is nice, but I can't help but thinking it doesn't suffer from a similar malaise. It is a beautiful place to wander about, but bloody expensive. There are galleries everywhere. Some are good, others less so. Some, it seems, assume that just being in Santa Fe validates their art and justifies the lofty price tags.

Restaurants too. Hype and style over substance, in the two I put to the test. And punitively expensive. It seems a shame that in a place special enough to not really need any selling, everyone seems determined to do just that.
Posted by Joe at 19:03