It's around a four hour drive from Santa Fe down to the town of Alamogordo. If you read the Frommers guide, you might wonder why I bothered:

While traveling in this area, I came to jokingly call it "Alamageddin," mostly because the town itself is fairly desolate, without many amenities.

Luckily, I'm not here to avail myself of any amenities, just to visit White Sands National Monument a few miles west of town. 275 square miles of gypsum dunes; the largest anywhere on earth. You seldom see gypsum as sand, because it is soluble. But here in the Tularosa Basin where there's next to no rain, the sun evaporates the water leaving the crystallised mineral at the mercy of strong south-westerly winds. 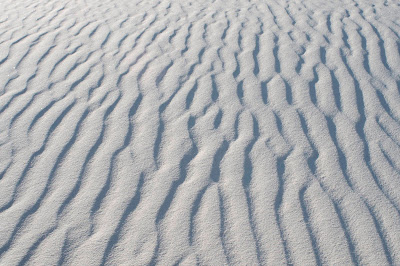 As the grains of gypsum are blown, they rub together until they shine brilliant white, and bank in dunes just like any other sand. Their colour means they reflect more heat than quartz sand, so you can walk across them without burning yourself. 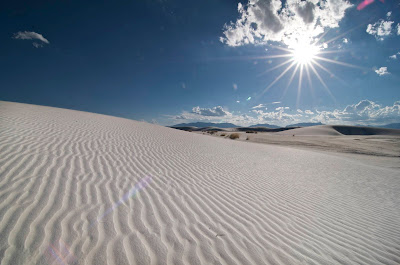 The dunes have an unusual attraction. It's a subtle difference really, but their ethereal whiteness imparts a strange virtue. It is a bridal white that hints at purity and holiness, and it lends an almost supernatural elegance that makes it seem other-worldly. You just won't see or feel something like this anywhere else on Earth. 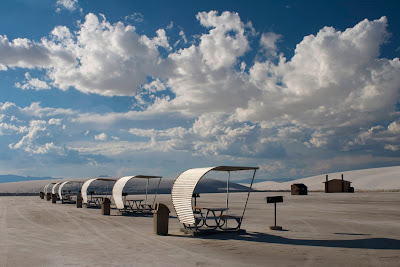 As usual, I wander off for a little solitude, in preparation for sunset. There are some good clouds about and I don't have long to wait. Unfortunately, some of those clouds park themselves resolutely in front of the sun. I trek for half an hour or so, to get closer to the horizon and further from anyone else. It's funny how we are drawn, almost magnetically, towards a sunset. I eventually climb a dune and sit in the sand to wait. 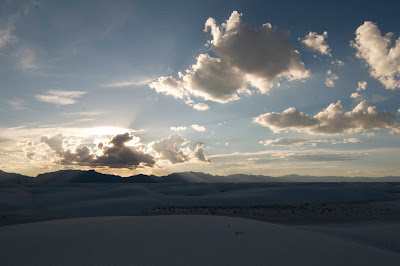 It's pretty dark, and the gypsum fades to a dull grey without the sun to help it fluoresce. I'm looking down, playing with the sand when the sun drops below the cloud line and lights me up. The grains run through my fingers as I am bathed in the purest light. 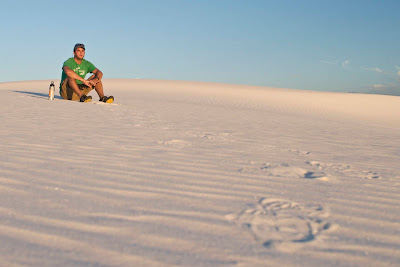 Suddenly the whole landscape is transformed. The clouds and dunes come to life, and play off of one another. It is a marvellous, peaceful privilege to experience. It doesn't last too long, and as the sun dips out of sight behind the San Andres mountains, the park descends into greyness again, just as its inhabitants begin to burrow out of their tiny holes and get ready for their sunless day to begin. 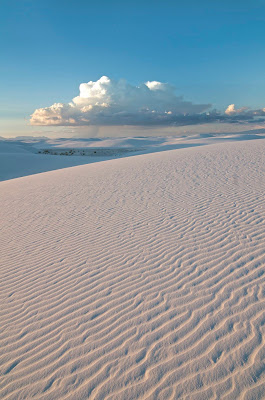 This isn't quite the end of the story though; another side to this place's history gives me pause for thought. Because the White Sands National Monument lies entirely within the boundaries of the White Sands Missile Range. And in a northern corner of the range is the Trinity Test Site where, on July 16th 1945, the first ever atomic bomb was detonated. That a land of such natural virtue was chosen for this is a cruel irony, and it will remain forever tainted as a result.

The transformation wasn't lost on those present that day. Once the day had gone "from darkness to brilliant sunshine in an instant", hands were shaken and backs slapped. A bottle of whiskey was passed around. The war was over. When they'd got their vision back, had picked themselves up from the ground where they'd been thrown, and had a moment to reflect, a more sombre mood descended.

We knew the world would not be the same. A few people laughed, a few people cried, most people were silent. I remembered the line from the Hindu scripture, the Bhagavad-Gita. Vishnu is trying to persuade the Prince that he should do his duty and to impress him takes on his multi-armed form and says, "Now I am become Death, the destroyer of worlds." I suppose we all thought that, one way or another.

Kenneth Bainbridge, the test director, expressed the same sentiment more succinctly. Seconds after what he called the "foul and awesome display" he turned to Oppenheimer and remarked:

Now we are all sons of bitches. 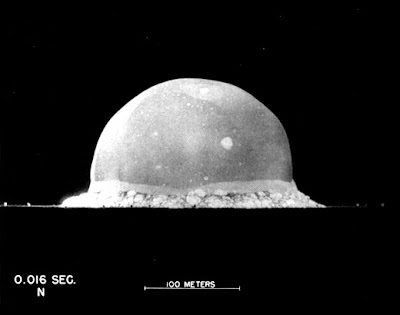