After a couple of days trying not to look like an American soldier (difficult with my new haircut, since the Korean barber obviously assumed that's what I was and cut my rug accordingly) I met up with a friend from cooking school, Maria from Korea, and we left Seoul for Okcheon.

It's a small town, in the countryside, with few obvious attractions. The local tourist information office, when Maria contacted them, actually asked why we were coming. Wandering around the dusty streets of the oldest part of town, an odd looking local materialises and offers to show us around. I assume he is either the village idiot, the resident drunk or, in such a small town, maybe both, in a combined role. 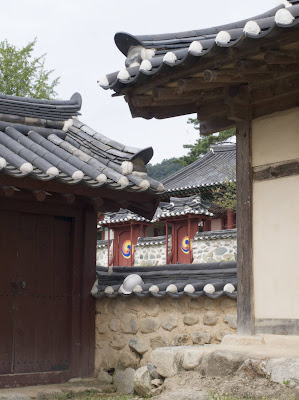 He is probably slightly drunk, but he is also very kind and pleasant. With Maria translating, he tells me he used to be fluent in English but with no-one to practice on he's forgotten it all. I assure him it's the same with my Korean. He leads us on a stroll around town, pointing out all the old buildings and curiosities. 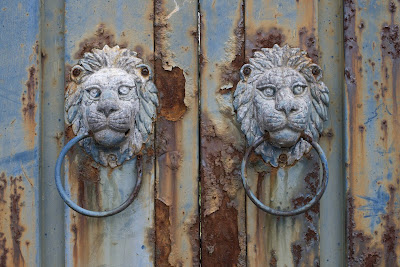 We make it back to our guest house and meet the owner. I ask what I should call him, and I think he replies to the effect of Mr Owner of this House. He likes me, and takes us on a tour of all the things he is making. Out the back, in huge ceramic jars, things are fermenting; kim-chee, soy sauce, paste, rice wine. He has jars of sweet rice honey made with malt, reduced and reduced. Bags of leaves and mushrooms are hanging on every eve. Later on we sit down for a homemade meal and everything we eat is a result of the time, care and love he puts into his food. 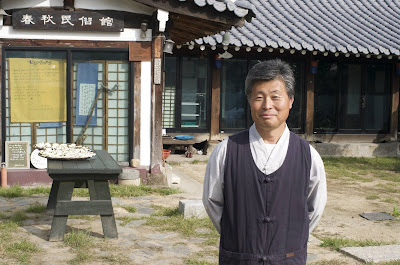 Mr Owner of this House 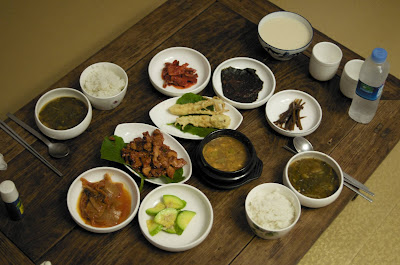 Dinner: made by his wife from the ingredients he has prepared
Korean food takes time, because practically everything is fermented. But paradoxically, Koreans are pretty impatient. Even here in the countryside, where people operate fractionally slower than in Seoul, the modern demand for expediency is marginalising culinary tradition.

There's a market in the newer part of town every five days. Fishmongers, live chickens, and even a few dogs (I don't think they're pets) bring noise and colour. Different types of seaweed abound, as do dried insects, biscuits and rice cakes. It doesn't take long to find someone selling knives, and I add a Korean cleaver to my burgeoning collection. They might lack the grace and finesse of the knives I bought in Kyoto, but certainly make up for it in character. 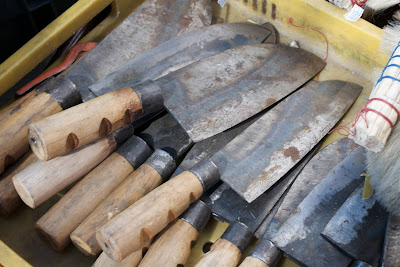 I, or rather we, are something of a curiosity out here in the sticks. Maria is obviously an out of towner and I may as well have two heads. Most people are really friendly, but one stall holder, an old woman, tells Maria to get lost. She says she will bring her bad luck for being with an American. It's sad really; although she is in a minority, her sentiments betray an unbending adherence to tradition that is creating a notable divide between old and young in Korea. It may be that she is a bigoted old fool who is unable to reconcile her Confucian upbringing with the modern world, or it could just be my haircut.
Posted by Joe at 06:55