Faster than a speeding train

It’s tempting to attribute the foggy haze that engulfed my shrivelled brain this morning to the jet lag, but I suspect the sake may have had a heavier hand in things. Either way, I was in absolutely no state to tackle the challenges that lay ahead, and procrastinated accordingly.

But sooner or later, I have to venture beyond the sanctuary of the front door, and make the journey to Osaka. The searing heat and cloying humidity are enough to dissuade me from taking on the subway, so I hail the first cab I see. Tokyo-Eki! I tell the old man in the Michael Jackson gloves behind the wheel. He responds in Japanese, I look blankly and pitifully at him in the mirror, and we drive off towards the station.

Buying a ticket is a lot easier than I thought, until it comes to paying. None of my cards work. They don’t work in ATMs either. I hold up my Barclays Connect and utter a puzzled grunt at a man behind a counter, but to no avail. So I begin to wander the streets of Tokyo in search of cash, backpack weighing me down and the sweat beading on my brow. I’d forgotten how it felt to be so foreign.

I lucked out and stumbled upon a Citibank just round the corner and withdrew tons of cash whilst marvelling at the touch screen desks and Bond like technology. It’s amazing how having money in your pocket changes things - suddenly I’m the intrepid traveller again. Ten minutes later I’m eating sushi from a bento box and sipping a lip twistingly bitter green tea drink in my window seat on the Nozomi Shinkansen from Tokyo-Eki to Shin-Osaka. The bullet train. 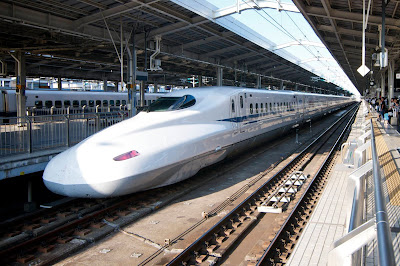 I’d been looking forward to this, though I don’t know why. Sure, it’s got a cool name, looks a lot meaner than other trains, and the staff wear neat military uniforms, but it’s still a train. And it’s fast, but the Chinese are a lot faster. The seats definitely weren’t built with Europeans in mind, but don’t stop my hangover kicking in and forcing me into an extremely deep sleep for most of the journey anyway. Far from feeling like a tour of the set of Blade Runner, the Japan I see through the window is predominantly agricultural.

By the time I get to Osaka I'm beginning to feel alive again. My taxi driver (“Kawasaki - like the motorcycle”) speaks phenomenally good English. He points out a few good places and tells me to stay out of the girlie bars or I’ll get fleeced. I’ve stayed in enough crummy motels in the last few months, so in Japan I’ve decided to go native, and booked myself a Ryokan. It’s like a hotel, only you have to wear special slippers, and sleep on the floor.

Waiting for me is a kimono, which I slip into after a shower. When a culture is so different to your own, you have to embrace it in a non-judgmental, honest and respectful way. No giggling or mockery, no matter how tempting. I’d love to say I’m grown up, mature and respectful enough to do so, but I can’t - the slippers don’t come in a size eleven and the robe looks like it’s been whipped off the nearest picnic table. One glance in the mirror and the photo takes itself. Oh well. 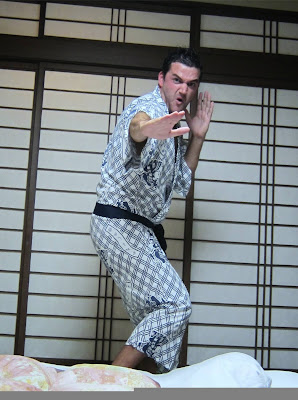