The streets of Tokyo are pretty quiet at four o' clock in the morning. Just roadworks and taxi drivers, until I near my destination. Then suddenly, as if from nowhere, emerges a hive of crazed and staggering activity: Tsukiji. 60,000 people selling 2,000 tons of seafood a day; the biggest fish market in the world.

I'd arranged a guide to get me in beyond the usual tourist places. Unfortunately, he declined to wait beyond 4:04, thus doing himself out of 7,000 yen. Without him to take me behind the scenes, I had little option but to queue for the tuna auction, passing the time taking photos in the darkness. 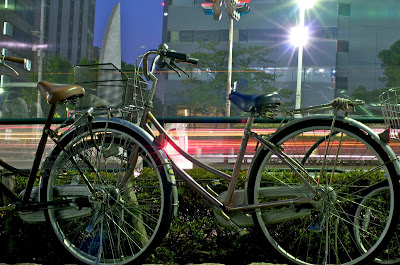 Eventually the slightly oppressive guards usher us into the waiting area and issue fluorescent vests. They may as well give us bells to hang round out necks. We remain in this room for a good half an hour, which only serves to increase the sense that we are a) prisoners and b) about to suffer some horrific trauma. 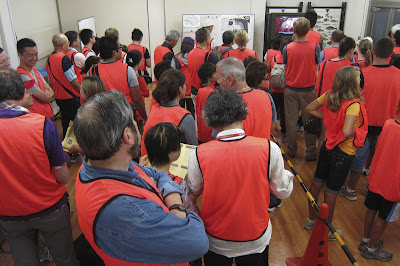 No need to worry - the tuna auction itself is pretty crazy, but despite the menacing looking hooks being wielded, no-one gets hurt. The tuna are all frozen and glistening white, their tails already hacked off and an incision made enabling the buyers to inspect the quality of the meat. There is much milling around and perusal of fish; careful scrutiny of the flesh, prodding with hooks and silent consideration. Everyone knows everyone else; they chat and joke, but keep their opinions to themselves. 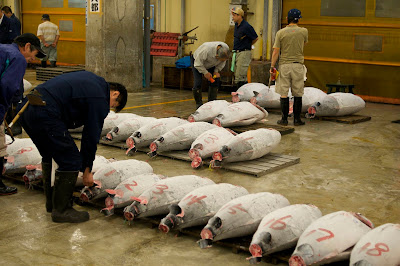 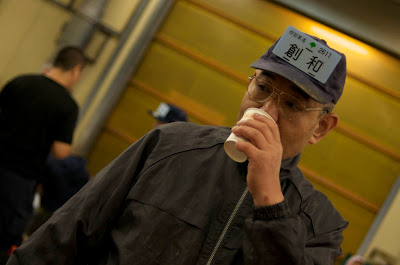 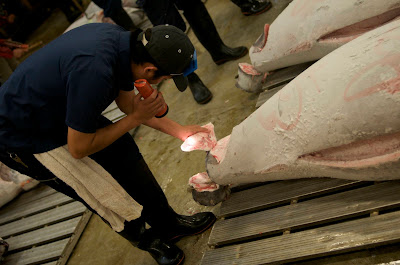 Eventually a bell is frantically sounded, the auctioneer climbs atop a small box and the business begins. I've been to plenty of bloodstock auctions in my time, and watched Bargain Hunt on TV, but what follows is slightly different. The quiet looking auctioneer shouts faster than the drill sergeant in Full Metal Jacket. I'm watching for bidders, but they are almost impossible to detect; only a quick scribble after the fact betrays the purchase. Another guy paints a name on the fish itself, which is then hooked and hurriedly removed. As the auction progresses across the room, more guys come on with barrows and trolleys and set about removing the tuna to be sawn into manageable chunks. 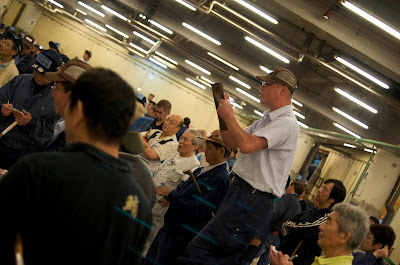 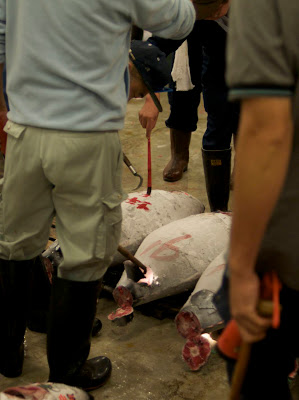 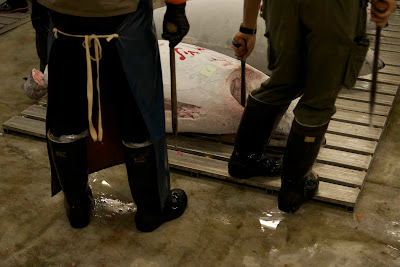 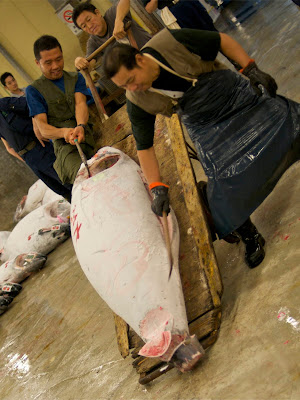 The whole thing is over in a flash, and we are rudely bundled out of the room, stripped of our orange vests and left to fend for ourselves, in daylight, mercifully, in the insane world outside the door. The market men have swapped the bikes they rode in on for little motorised carts that whizz in and out of one another. There are millions of them; how they don't crash into one another, and everyone else, is a mystery. Huge mountains of polystyrene boxes line the road. Everyone is doing something. 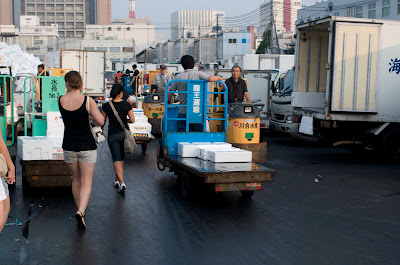 It's just gone 6am, which means time for breakfast. I pull up a chair at Sushibun, that's been here for 160 years. The sushi is excellent, of course, hand pressed in front of you, but the miso soup with tiny clams is out of this world. Which is a relief, because it is obscenely expensive.

Visitors aren't supposed to enter the main market until after 9am, but I'm not about to wait around for two hours when I'm this tired. And besides, I have already decided that I don't feel comfortable wandering around taking photographs, so am going to keep the lens cap on. Instead, I'm going to do something that should make for a far better experience all round: I'm going shopping.

Once people realise you are actually going to buy something and have overcome the shock, they're very friendly. The prices are very reasonable compared to the outside, and the seafood unbeatably fresh. An afternoon in the kitchen later and the day ends with a meal of tuna sashimi, scallops in mirin on sake soaked edamame beans, calamaretti with shiso oil, marinaded salmon with sansho pepper and Japanese potato salad. All of which makes waking up at 3.30am seem almost worthwhile, though I'd rather not do it every day...
Posted by Joe at 02:12