Before I came to Los Angeles, people told me it was crap because it was basically a giant car park with some obscenely rich areas, and some obscenely poor ones. And when I heard that, I thought I should feel pretty much at home, since it sounded exactly like London.

Just like London, it is a city made of many different towns. I haven't been here long enough to tell you which London Boroughs they equate to, but I'll take a stab at Beverley Hills = Kensington and Compton = Peckham to give you both ends of the spectrum.

What it lacks in history, it makes up for in celebrity. I marvelled at the Getty Villa in Malibu, a stunning example of Roman architecture, built in the 1970s. On a driving tour around town I passed the Scientology Celebrity Centre on Franklin. Driving around Beverley Hills past giant iron gates and the distant mansions, it was a nice change to see Al Pacino's gaff, where he is often to be found sat on the porch playing chess a few yards from the passing plebes. 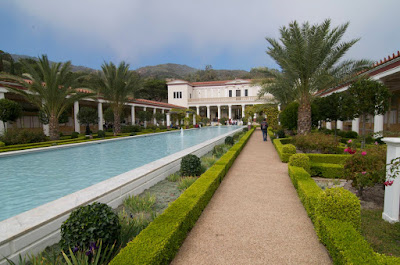 A bit like Alcatraz, Los Angeles feels familiar. For the millions of shit films to come out of the place, a few gems have been set here as well; Chinatown, L.A. Confidential, The Big Lebowski. But none have gotten under the skin of the modern city quite like Crash (Paul Haggis, not David Cronenberg, before you ask): the story of a place in a constant state of torsion, punctuated by a series of private epiphanies.

It's the sense of touch. In any real city, you walk, you know? You brush past people, people bump into you. In LA, nobody touches you. We're always behind this metal and glass. I think we miss that touch so much, that we crash into each other, just so we can feel something.

In my nine years in London, I brushed past people, people bumped into me. Instead of freeways snaking across town, we have underground trains and buses. In this cramped, collective and miserable ushering of bodies, Londoners are exposed to an exasperating range of horrors: body odour, bad breath, RnB music, loud phone calls, inappropriate displays of "affection". But worst of all, you get to look at everyone else's miserable faces.

In Los Angeles, you are protected from sharing these moments by your car. Everyone trundles off to work in their little (well, large) bubble. Inside it you can stink, sweat, grope, shout and fume as much as you like. The surplus angst that might cause you to shove someone in the back on a crowded escalator vents itself through the horn, or agressive lane changing. But the principle's the same; everyone gets home from work stressed, knackered and angry. There's a bit of extra fallout in terms of pollution and obesity of course, but it's still the Rat Race, and the Rats still win.
Posted by Joe at 21:12