I assumed that after the States, arriving in Japan was going to come as something of a shock. Like being plucked from a Caribbean beach and plunged into an ice bath in the Norwegian Tundra. But actually it all felt rather familiar.

Air travel is hardly travel at all; it is transportation, and it robs you of a journey. So the excitement of going from North America to Asia is tempered by the sterile familiarity of all airports. No-mans land connecting countries the world over. Thousands of people funnelled, sorted and repackaged in steel tubes, then distributed around the globe. 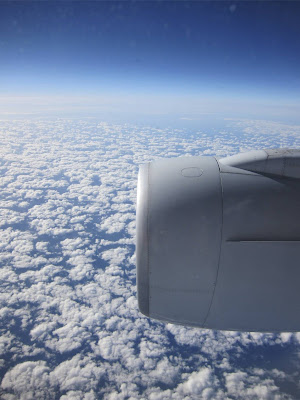 It's an empty flight. No-one on my left and to my right just the engine for company, hovering there all the way, sucking us towards tomorrow. We took off at noon on Wednesday. Twelve hours later, at 4pm on Thursday, we dipped beneath the clouds and a country emerged from the sea. It was flat and green, and as we glided over it, the tiny little rectangular fields made the land look like a child's watercolour palette of greens, browns and yellows. And everything looked unfeasibly miniature.

I'd expected the bus from the airport into town to feel completely alien, but it actually felt like driving round the M25. It was getting dark by then, and Tokyo, when I arrived, was just a sea of lights. Waiting for me with beer in hand was Dave, my best friend. We walked to his place and tackled my jet lag in the time honoured tradition; by getting absolutely arseholed on local booze and staying awake as long as humanly possible.

At some stage during the evening I received a phone call from my brother-in-law telling me I'd just become an uncle again, and suddenly I felt a long, long way from home.
Posted by Joe at 20:02