The best part of a tedious hour on the streetcar, ten minutes on a creaky old ferry, and the energetic throng of downtown Hiroshima is swapped for the languid streets of Miyajima.

Islands always feel so much further from the mainland than they actually are. An hour on the tram just gets you to a different part of town; those ten minutes bobbing across the water carry you to another world. Feral deer greet you from the ferry terminal just to prove the point. 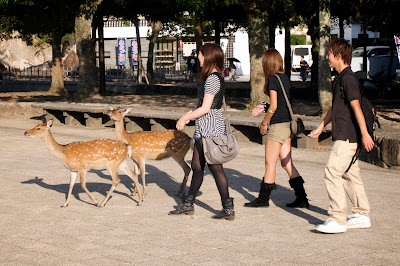 The main attraction of Miyajima is the Itsukushima Shrine, a sprawling temple that floats on the water's edge. You can climb up the steps to a five storey pagoda, or tread the boardwalks as they hug the contours of the cove. 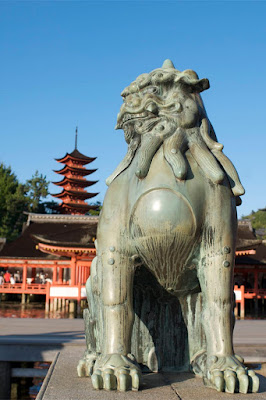 The shrine's big drawcard is its torii, or gate, that sits out at sea. It is one of the classic Three Views of Japan as first identified by Hayashi Razan in the seventeenth century. Accordingly, every man and his camera is here to capture the sight.

I arrogantly eschew everyone else's vantage point and go for a walk round the cove to scope the best angle. The sun is on its way down, and when it's not shining on the torii you don't get the benefit of its amazing colours. Everyone else is looking at the shady side. 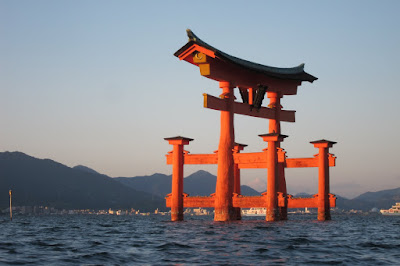 I try and lure a deer into the foreground of a shot from the sand, but without any food to bribe him, it's difficult. He just looks at me contemptuously and seemingly threatens me with a snarly glare for taking his picture. 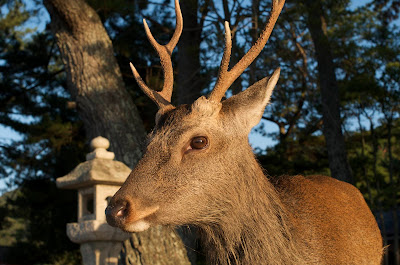 I'm looking across at the assembled masses with their tripods wondering why the hell they're bothering when it dawns on me (or should that be dusks?) that the sun is now setting behind me and they are snapping marvellous shots of it with the torii in the foreground. By the time I make it round there it's too late, but it was a crap sunset anyway and I'm pretty sure it wouldn't have been worth it. Everyone settles down to wait for the lights to come on. Sitting patiently for the last throes of daylight to extinguish themselves doesn't appeal too much, so I fortify myself with a good feed and return an hour later when it is pitch black, the lights are on, and everyone else has gone home. 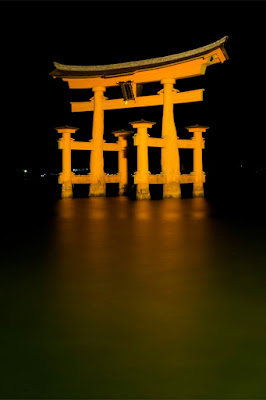