Memoirs of a Geezer

Kyoto lies at the very heart of Japanese culture and history. A place of extraordinary beauty, with over 1600 temples, 400 shrines and 17 Unesco World Heritage sites. All of which seems unlikely when I step out of the station to be confronted by just another city. 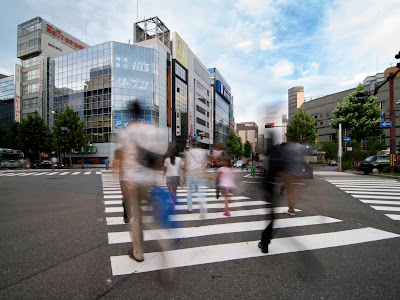 As well as all the eating and cooking, I'm aware that I have quite a bit of sightseeing to squeeze in, so visit a couple of sites near my ryokan. The temples of Nishi-Honganji and Higashi-Hohganji contain some of the largest wooden structures in the world - all joinery, no nails. As you walk about them they emit high pitched creaks, like you're crushing a mouse with every step. Their ages vary depending upon when they most recently burned down, a fairly routine hazard judging by their chequered histories. 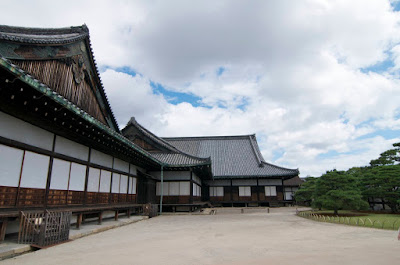 West of Kyoto, the suburb of Arashiyama contains a few hidden treasures away from the main drag. The gardens of Tenryū-Ji are widely regarded as among the best in town. They utilise a technique called shakkei, meaning 'borrowed landscape', to incorporate the backdrop of the mountains into their aesthetic. 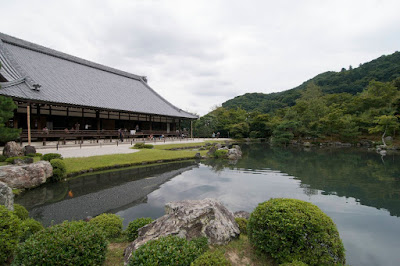 Sadly it feels just a little too crowded though to truly convey the sense of tranquility the architect, Musō Soseki, had in mind when he created it back in the fourteenth century, but it is beautiful none the less. From the gate of Tenryū-Ji, a path leads through a huge bamboo forest. The most delicate shades of blue and green, and the sheer height and wispiness of the stems belie their incredible strength. The temperature cools a little, and even the tourists seem to go quiet in the imposing shade. 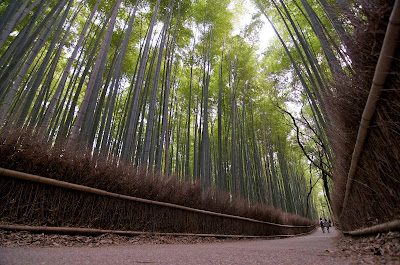 Through the forest lies the villa of Ōkōchi-Sansō, built by a movie star as his private retreat. The entrance fee of ¥1,000 keeps a lot of the tourists out. Intricate bonsai trees, raked gravel, stepping stones through the moss and the occasional panorama of Kyoto and the surrounding hills punctuate my quiet stroll around the stunning gardens. 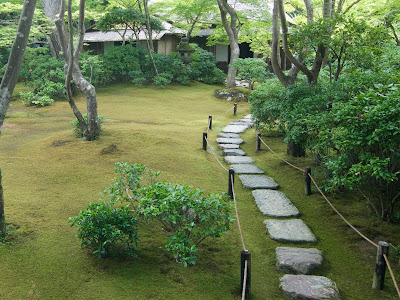 Back in the city and I feel obliged to head for Kiyomizu-dera, perhaps the most famous temple in town. It is absolutely pissing down by now. Everyone else seems to have an umbrella, including all the cyclists, and it is only when I finally relent and buy one that the rain abates. Walking up the hill, I know what I'm in for: hordes of sightseers and schoolkids. 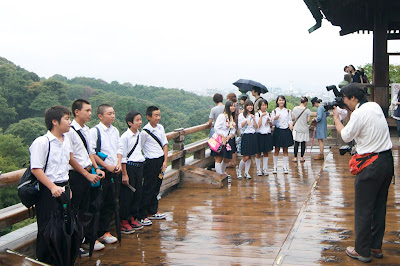 I shouldn't complain though. The temple is stunning, and its setting, perched on the edge of a hill as the city slopes away below, only adds to its majesty. After a little walk around the grounds, I spot some iron gates leading to a massive cemetery. No less beautiful than the temple itself, and completely devoid of people (live ones anyway), it has the feel of a very special place. 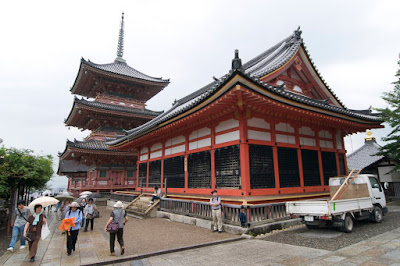 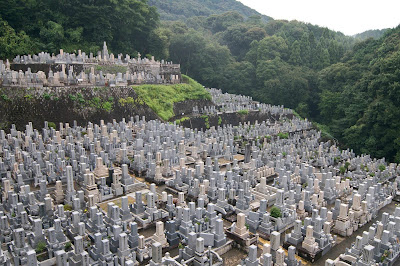 It's getting late by the time I make it to Ginkaku-ji, and I'm the last guy they let in before they shut the gate. The wabi-sabi aesthetic is said to have originated here - beauty in the simple, imperfect and transient, rather than the elaborate or luxurious. All the tourists have gone home for the night, so I am left to wander for the last twenty minutes in peace as the rainclouds darken. The gardens here rank among the most beautiful places I have been in the world, and I emerge feeling completely purified by the experience. 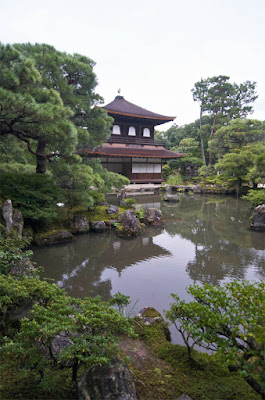 The gardens at Ginkaku-ji

This is the real attraction of Kyoto for me; the tranquility that flows through life here like water. It's not just in the temples and gardens, and in fact they are seldom empty enough for it to prevail. But it's walking through narrow back streets to a soundtrack of clattering dishes and twittering birds as old ladies water their pot plants. And it's the calm and politeness that they just can't seem to hide.

From the bus home last night I saw two people ride their bicycles into one another. No one took any notice, just another passing thing in the daily routine. A stand off ensued as they both paused to let the other go first, before riding off in the rain under their umbrellas.
Posted by Joe at 19:01