Whatever the little itch that unsettled me on Friday really was, I felt pretty sure a trip out to the Mount Fuji National Park would scratch it into oblivion. Four hours after strolling knowledgeably through the human circus that is Shinjuku station, Dave and I, replenished by udon noodles, were off on our rented bikes (ladies' bikes) around Lake Kawaguchi while the majestic cone of Fuji-san, resplendent in the afternoon sun, watched over us. Glorious doesn't even come close.

Halfway round and we kicked up our stands outside a cafe and sipped coffee in the shade. The wake boarders cavorted on the lake and the clouds rolled in and over the old volcano, never quite lingering long enough to upset his venerability. We breathed in the unbelievably fresh, clear air, and sat in awe. 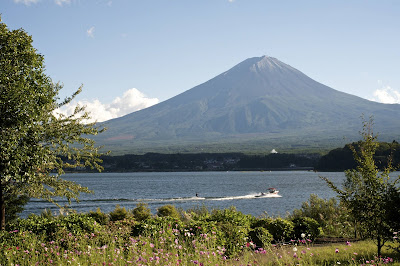 Sitting there you can't help but think about the innate beauty of the world. There is very little left in me now that can say with any honesty or conviction, that I would rather live within the confines of a city than the countryside.

Which made the trip halfway up Fuji the next morning a little disappointing. The road ends at the fifth station where a grotesque cluster of appalling souvenir shops and third rate restaurants dig their claws into the side of the volcano like a mangy, reticent cat. My respect for the US National Park Service grows silently inside; they would never allow anything this ugly to tarnish such a special place. 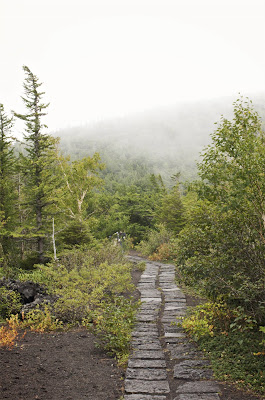 Things improve as we drop below the tree line and escape the hordes. The summit is obscured but it doesn't matter; we pick our way along pathways over the volcanic ash as the mist envelops us. The drifting cloud, the cold, the trees; all these things combine to conjure a sense of magic and enchantment. The spirituality is tangible. 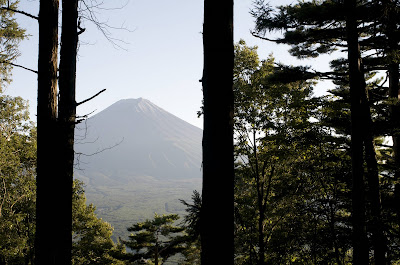 Looking at the great cone from a distance, or standing on the slopes, you could be forgiven for being impressed by its permanence. But the mountain yields to the seasons, and changes its appearance in line with their whims; the first snow fell just this week. And you might just forget too that the earth has rumbled underneath this spot for millions of years, and belches forth its fury every few centuries or so, just to remind us that things don't stay the same for ever.
Posted by Joe at 08:42