Camping has been such an integral part of the journey these last few months that, with the days running out, I decided I would really like one more night under the stars before I leave America in my wake. It's a long old slog from Scottsdale back to LA, so I take a look at the map and decide I can split the journey and camp out in the Joshua Tree National Park, California. 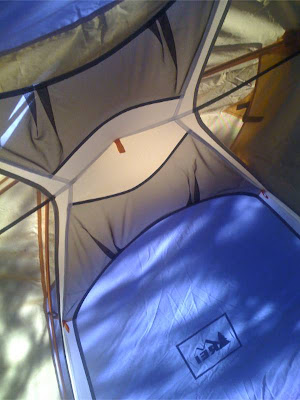 The inside of my tent on a sunny morning

Nice idea, piss poor planning. As I approach the turn off for the park, just after 3pm, the outside temperature is showing 112ºF (44.5ºC). This is definitely not hiking weather. I open the car window and feel like I'm inside a tumble dryer. It's not camping weather either - it probably won't drop below 35ºC even in the middle of the night. So I decide to keep driving until the mercury drops to a more forgiving level.

To my surprise, it keeps rising. I stop for gas in Indio, and it's at 117. Shortly after, it peaks at a whopping 121ºF (49.5ºC). How can anyone even exist in these conditions? It's pretty obvious by now that I'm going to have to go all the way to the coast, and tomorrow's destination, Huntington Beach. An hour or so later and I am fully engulfed in Greater Los Angeles traffic at 5pm on a Friday. I'm not sure that LA doesn't actually stand for Los Autos.

I'm probably going to tar a few innocent people with my whopping great brush here, but there is one fact that has become increasingly obvious to me along the 9,000 or so miles I have driven in the US. Americans can't drive. Maybe you're American and are insulted by this? I apologise. Please feel free to refute any of the following assertions:

1. Americans do not indicate when they are about to manoeuvre or change lanes. Ever. Different cars don't even have the same colour indicators like in other countries, it's that irrelevant.

2. Americans do not observe any form of lane discipline. On a completely empty highway, a car hogging the outside lane once pulled over (without indicating) to allow me to pass, then pulled back out to re-occupy the passing lane. Undertaking, overtaking, it's all the same to them.

3. Americans cannot drive unless they are using a cellphone. They find it very hard to operate a ve-hicle with two hands. Using a cellphone removes the temptation to indicate, and the drop in concentration makes changing lanes easier.

4. Drink driving is absolutely rife in America. It is an integral part of life, everywhere you go; an acceptable risk. I have seen people barely able to stand getting behind the wheel. The individual's right to get hammered and drive themselves home is considered greater than the right of everyone else not to be endangered by them.

5. American drivers don't let each other out or thank one another. If you do stop or slow down to let someone out, they will probably hate you for it as much as the drunk guy in the car behind you who is on the phone to his wife and about to undertake you (without indicating).

All this makes driving for long periods especially taxing. You are in a heightened state of alert, constantly trying to second guess everyone around you. But most of all, I am having to remain permanently vigilant, in case I start driving like them. I have the occasional lapse, not indicating or undertaking, but manage to remain off the phone and keep the lid on the whiskey. 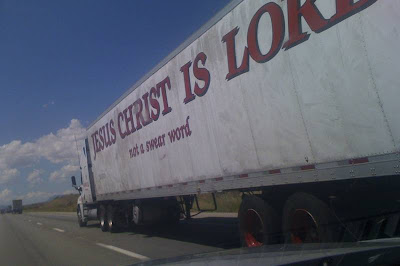 I use my cellphone whilst driving, but only to take this photo
By the time I finally arrive in Huntington I have covered almost 400 miles and been in the car for nearly seven hours. My friend Blom is on the piss somewhere, so I have to climb through the dog door to get in his flat. When it becomes apparent that I don't fit, I relax into a cold beer on the porch. And as the last sip passes my lips, an irresistible urge to fall asleep grips my body, I check myself into the nearest motel and promptly pass out.
Posted by Joe at 10:36