I apologise in advance if this gets boring, and I'm sure the novelty will wear off, but I suspect I may enjoy more than a few exceptional meals in Japan.

My first night in Kyoto, I had the kaiseki menu at Isshin Kyo on the recommendation of some friends whose opinion in such matters I greatly respect. I'm pretty sure they're not about to let me down when the first of my eight courses, Assortment of Delicacy, arrives: 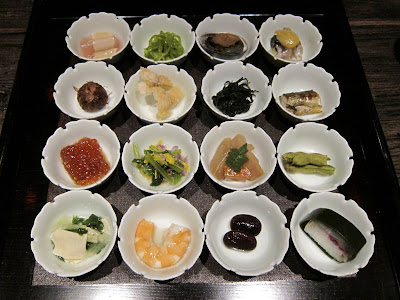 The mirin soaked fish eggs take the prize, though the competition was stiff. The clear broth that follows comes with "Tsukimi Tofu". I later discover that Tsukimi means "Moon Watching". Because September is the month of the harvest moon, Japanese chefs pay homage through their food. So I have a full moon shaped piece of tofu, with crescents of yuzu peel for company, in my soup. Is there anywhere else on earth where food and culture embrace one another in this way? 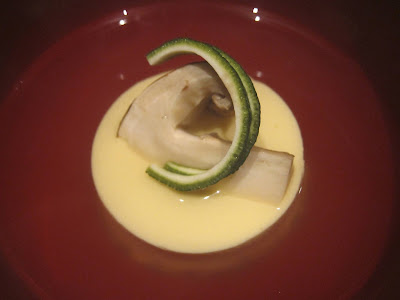 Tsukimi Tofu
The rest of the meal is brilliant. The best thing is that one of the chefs who speaks English (a recurring theme now) comes out to chat. He shows me how to make the shabu shabu hotpot, and we talk about food, cooking and travelling.

If I want to really begin to understand Japanese food, though, I'm going to have to do more than just eat it, so take a walk through the Nishiki food market. In between tasting all the pickled vegetables, realising that the papery smoked stuff the other day were bonito flakes and eating a small octopus whose head had been stuffed with a quail's egg, it occurred to me that if I lived in this country for a thousand years I still wouldn't comprehend one millionth of their cuisine. 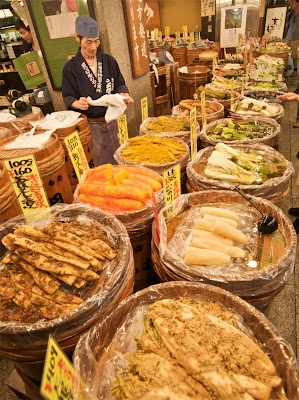 But I'm not about to let that put me off. A little later on, with three others for company, and I was in the home of Emi Hirayama for a cooking lesson. 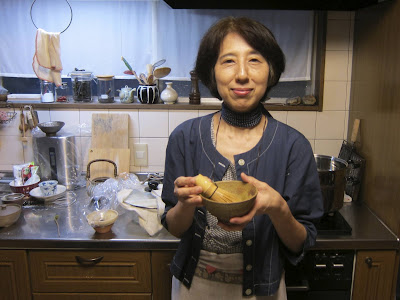 Emi makes green tea
We made an autumn salad, delicately balancing the constituent parts with our chopsticks; pike eel spring rolls; grilled yellowtail marinated in mirin and miso soup. But really the best thing is beginning to understand Japanese ingredients and how they are used. Now I know how they make bonito flakes, and that they are a lynchpin of Japanese rice, stocks and soups. Other ingredients blow me away; like sansho peppers, insane bursts of intense citric heat. It's a start. 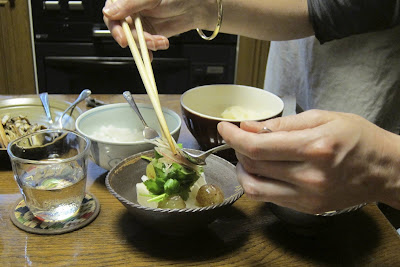 Assembling an autumn salad
Emi is a wonderful lady, and the joy she gets from sharing her culture and cuisine with foreigners is obvious. I even went back today and made Japanese sweets with her, a laborious process, involving absurdly glutinous concoctions of various rice flours and starches, with red bean paste. The rewards don't quite seem commensurate with the effort, and if an order came in for fifty daifukus I'd probably just throw in the tea towel. 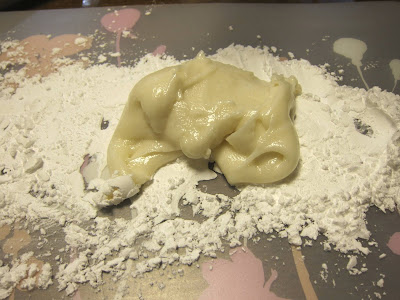 Making daifukus
But all that hard work certainly builds up an appetite. In contrast to the fine dining at Isshin Kyo, I pull up a stool in the local noodle bar. I choose my dinner from a vending machine that issues a meal ticket, and sit and watch as the two chefs get to work. Neither of them can be any older than 21 but they work quietly and brilliantly - one on the noodles and one on the sauce. The bowl they present me, that only cost a few hundred yen, is just as good as anything else I've eaten since I got here.
Posted by Joe at 06:57