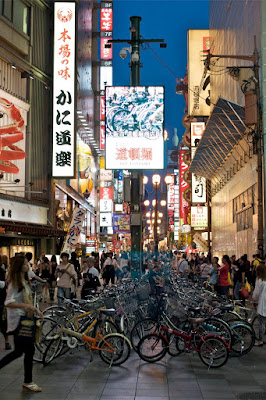 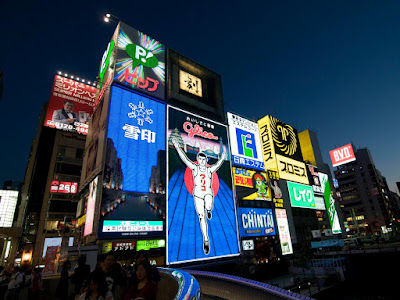 I’m a massive fan of Japanese food, but here in Osaka it is more than a little daunting. There are thousands of restaurants. On the side streets they hide behind funny little curtains, and their names and menus are all indecipherable. On the main arcades they have unappetising plastic dishes in display cabinets, or less subtle alternatives. 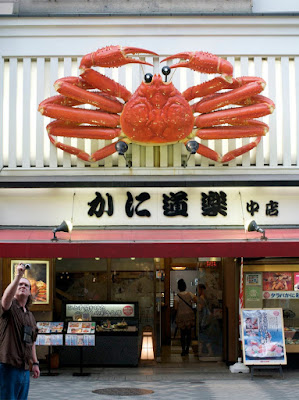 I'm sticking to the back streets. I walk through the door of my first true Japanese restaurant and three extremely short ladies in traditional dress start bowing profusely and looking awkwardly at one another. I grin inanely and luckily, moments before I instinctively begin speaking Spanish to them, they usher me to the counter. Two chefs bow and we exchange konnichiwas.

I keep it simple - appetizers, sashimi and tempura. Not very adventurous but there’ll be time for that later. The sashimi is the best I have ever had. So fresh and soft it just disappears when you put it in your mouth. The texture is phenomenal. The little flowers that you scrape into the soy sauce along with the wasabi scatter bursts of crunch and flavour as I eat.

Their presentation is deadly. I’m watching dishes leave the counter every few minutes and they look incredible. One of the chefs speaks some English and comes round to talk to me. He shows me a book he has that translates Japanese food into English. I need one. 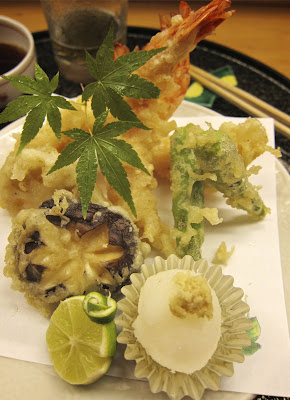 The first time I bought tako-yaki from a street vendor in Asia I assumed by looking at them they were like a sweet little doughnut or something, not greasy octopus balls. I will be assuming nothing in Japan. Around the Dotombori arcade in Minami, there are hundreds of tako-yaki stalls, but today I saw one with a queue. A long queue. I wasn’t that hungry but I joined it anyway, and watched the two chefs dextrously working their magic. They were topped with a smoky paper like substance, that melted into them, and were delicious. 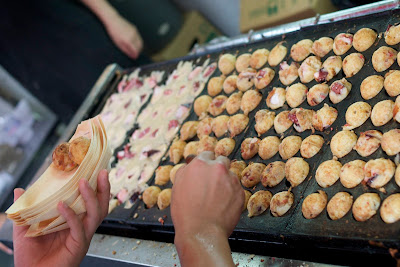 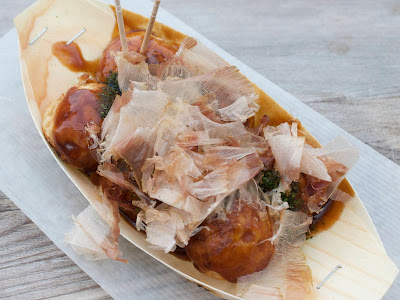 For dinner I decide to tackle Kaiseki - a set menu designed to showcase the skills of the chefs. I find a little laneway with a high concentration of serious looking restaurants, and begin trawling their doors and menus for clues, not that I know what they might look like. 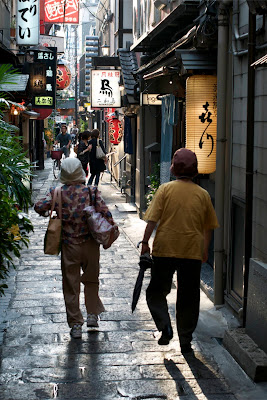 Eventually I plump for a place that has a small sign in English in the corner of the window. Maybe someone in there will be able to explain some of the obscurer ingredients. I'm the only guy at the counter, with five young chefs the other side of it. Open kitchens in England are one thing, here you're almost in the kitchen. Watching them working away, balancing ingredients on the plates with their chopsticks, is mesmerising. 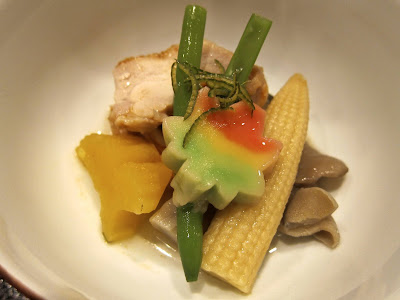 What follows is a succession of extraordinary flavours, textures and colours. Jellified fish roe with tart greens; sashimi; glazed chicken; tempura; grilled fish; a broth with some bizarre green substance wobbling around in it; crab meat with pickles and a strange medley of vegetables; mushroom miso soup deeper, richer and more intense than any I have tasted before; crisp pickled vegetables; then a dessert of papaya and a kind of creme caramel made with sweet potato(!).

I have decided to eat everything that is put in front of me in Japan (except Dolphin - have you seen The Cove). At times that could involve some strange surprises, but that is half the fun - nothing really looks like what it is. Take the grilled fish dish for example - here's what I wrote in my food diary:

Seabass, a very small egg, scallop with cheese(!). Some kind of eggplant like vegetable with dry hoisin, then four things that are both delicious and completely unidentifiable. 'A riddle, wrapped in a mystery, inside an enigma'. 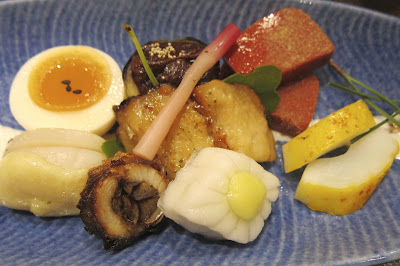 Towards the end of the feast the head chef appears. He too speaks a little English and we exchange pleasantries. He is watching me eat - really watching, to gauge my response, see if I really like it or am just being polite. I don't disappoint him - the food is incredible and I tell him so. He compliments me on my chopstick technique - I'm sure the pea sized tomatoes were a test. When I leave, all the chefs file out behind the counter and begin bowing. I'm bowing too, and firing off the arigatos and sayonaras as I back reluctantly out of the door. 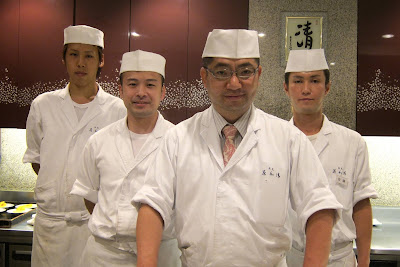 Walking home along the narrow street, smiling and content, it dawned upon me that behind all those doors are thousands more bowing, proud, brilliant chefs; quietly, diligently and expertly producing food of the highest quality. I could have walked through any one of them and been no less blown away.
Posted by Joe at 19:41