If you've ever watched a Western, chances are you've seen Monument Valley. John Ford and Sergio Leone both used it to great effect - the iconic sandstone buttes completely encapsulate the essence of the wild west. I couldn't have imagined quite how special they would be in the flesh.

As we neared the park, the thunderstorm we had been watching from a distance gathered before us. We stopped before a long straight road, and watched the weather cross. Before long the wind was howling around us as the lightning came down in the valley. As we approached, the buttes appeared on the horizon. The iconic, finger like rocks, and the larger mesas. 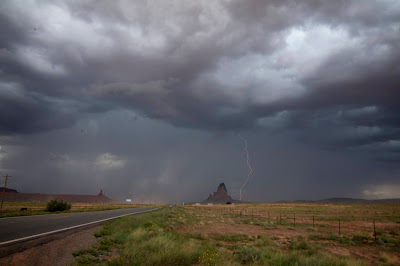 There is a seventeen mile dirt road that loops around the valley. The first couple of miles of this are torturous. I'm seriously worried that I'm going to pop a tyre, and that we're having to drive so slow it will soon be dark. When we eventually get clear of the bumps and pull over, the low sun emerges from behind the dense clouds and bathes the whole valley in wonder. I forget about the car, the world and all its worries, and gaze in silent awe.

I can't quite put my finger on what makes it so special. Somehow the bright green desert grass and the dark grey clouds frame the rocks, and allow their redness to glow like hot coals. Whilst the thin clusters of stones are the most iconic, the bigger mesas seem the most impressive when clenched like this between earth and sky. 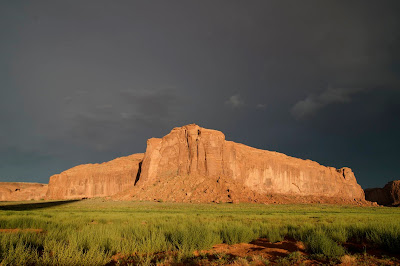 There is something deeply spiritual about Monument Valley. What an extraordinary coincidence that the great monoliths should bear such resemblance in their striking shapes to both ancient temples and modern cathedrals. The thinner, statuesque buttes punctuate this landscape, like giant chess pieces. Something tangible flits between and around them all, as if they are talking with one another. 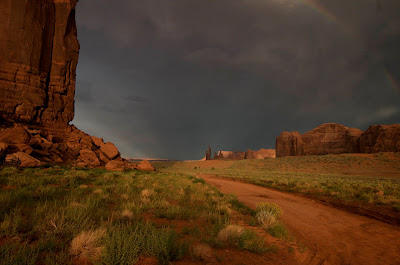 As the sun disappears, beams of light seem to be emanating from somewhere on the horizon, as though its rays are being bounced back from some giant mirror. With the final setting of the sun the great rocks cease to glow, leaving just their eerie silhouettes to haunt us as we quietly leave in the darkness. 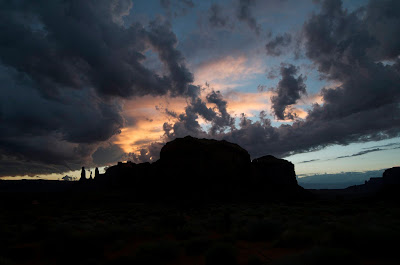 There is no question among us that we are somewhere quite remarkable. A spirituality both natural and human separates Monument Valley from the other wonders of the west. As the eons scraped away the hundred million year old plateau and left just these strange beacons standing, it is as though they lowered us a little closer to the Heart of the World.
Posted by Joe at 19:06