Four weeks in the Mustang and it's time for a change of ve-hicle. Which means it's time for two muscle cars to have an arm wrestle, as I give them the Clarkson treatment: 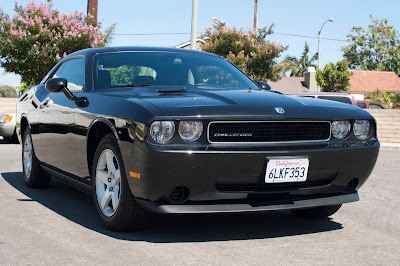 Some cars are built to turn heads. Long, wide and with all the poise and menace of a coiled cobra, the Dodge Challenger SE is definitely one of them. It looks mean. Bad Ass, according to the first of many passing comments. Unfortunately, it seems they spent so long worrying about how it looks that they forgot to actually put a car inside.

It's 3.5 litre V6 accelerates like a shopping laden octogenarian, taking 8.1 seconds to drag itself up to 60mph. I stopped counting because, thanks to the gelatin injected suspension, I bounced around the seat so much that I knocked myself unconscious on the ceiling. The accelerator feels like a wedge of brie glued to the driver's foot well, and responds like one when pressed.

The interior is exactly the same as the mid-range Dodge Avenger I drove in Texas, and shares all its shortcomings. There's no excuse for windows that don't have closure or auto open on modern cars. It handles like the Avenger too - like a large sailing vessel. The similarity betrays my original suspicion. They took a turd, spent a long time polishing it, and only succeeded in making it look like something it isn't. 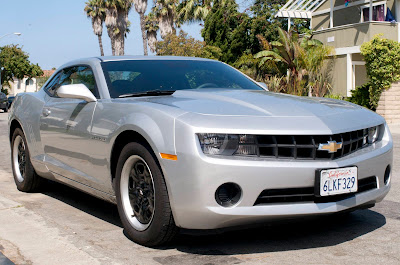 The Camaro's angles are pure muscle: hard, angular and tight. It's lower, shorter and narrower. It feels more like a sports car and less like a jacked up New York taxicab. The interior is minimalist and different. Once you've worked out where everything is, it all makes sense. And the accelerator is a pedal, not a piece of cheese. And when you depress it with your foot, something special happens.

The adrenalin rushes through the car as much as the driver. The suspension twitches and stiffens as the 3.6 litre V6 takes off. Six seconds later you're at 60, and after 8.1 seconds when you're doing 75, you're looking in the rear view wondering where that mean looking black blob you passed a hundred yards back got to.

Anyone can make a car to go fast, but even in America, they have corners too. And the Camaro takes them in its stride. You can point it into them, like a real car. The brakes feel a little spongy, presumably because the last guy to rent it ragged it to pieces.

On the downside, the visibility is appalling, and the trunk opening is the size of a letterbox. But who cares? After five minutes behind the wheel, I knew it was time to take to the open road once again. Four stars for the next four weeks, because they're gonna be a lot of fun. I'd give it four and a half if I knew how to.