It begins as a tiny hairline crack in the surface of the sandstone. In time, droplets of water find their way into the crack. As they run its length they carry away particles of the rock and the crack widens and deepens. Where the strength of the sandstone is uneven, or the force of the water irregular, the crack widens in dips and swirls. Add the wind, flash floods and a few million years, and you have a slot canyon.

Antelope Canyon in northern Arizona is the most famous and photographed in the world. Towards the entrance is a plaque dedicated to the memory of eleven tourists who perished inside when a flash flood hit in August 1997. I steal a quick glance toward the clear blue sky, and descend into the Lower Canyon through an opening that must surely preclude very fat people from enjoying the natural wonders within.

Slot canyons are apparently a magnet for serious photographers. I take my crappy tripod down with me in case I need it, but I don't. It's almost midday and there's plenty of light. You can't photograph the top of the canyon because of the huge range between the light and dark. Well you can, but it looks like this: 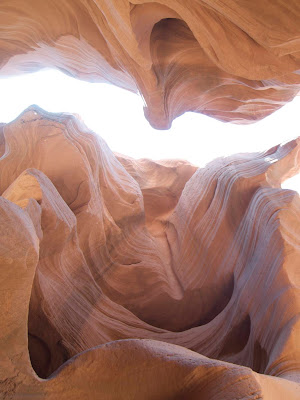 I can't seem to escape the haunting thought of what it must have been like to be trapped in here when the water broke. The floods that cut a canyon out of solid rock to lure those people in, then crushed their bodies against the delicate walls before carrying them off without a trace.

We manage to drift off the end of the group and take our time to marvel at the intricate patterns on the sandstone walls, and the huge curves and spirals that make you feel like you've climbed inside a sea shell. As the sunlight filters down and bounces off the sand, delicate pastel colours seem to soften the walls. Occasionally the curves form edges, and up close resemble something surely man made. 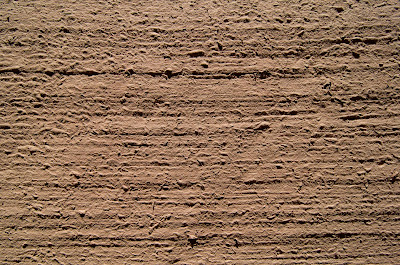 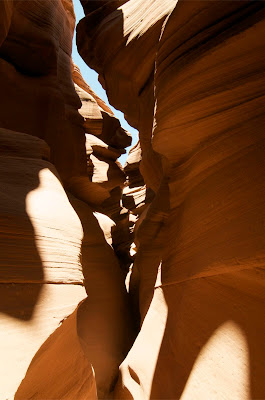 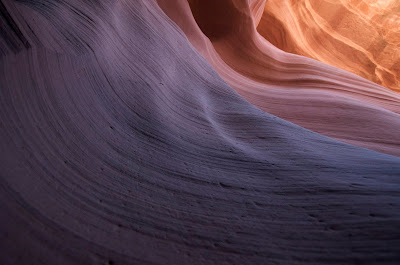 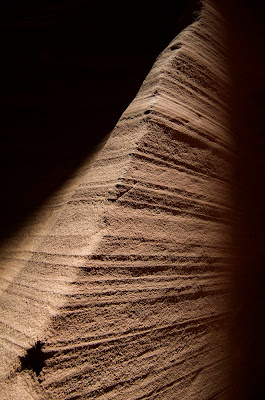 Water may seem free in its movements but it follows the same rules as the rest of us. It might have started with a trickle, but each subsequent drop followed the same path. Eventually the trickle became a torrent, eroding and sculpting the rock into the most elegant twists and curves as if a ballet dancer pirouetting through the air had carved the stone with her shadow. Yet despite these free flowing strokes, the walls retain so many patterns, with such structure and regularity, it seems impossible that they were created by chance, and not by meticulous adherence to some great design.
Posted by Joe at 14:51