Some time in the 6th century AD, Native American Indians came to live on Mesa Verde in the south west corner of Colorado. They farmed and hunted on the mesa top, where the land was fertile enough, but prone to long periods of drought. They built homes, initially simple pit houses, but later sophisticated stone masonry villages. Then, around 1200 AD, they began to build homes on ridges and alcoves in the cliff faces below the mesa top. The greatest examples, like Cliff Palace have survived to this day. 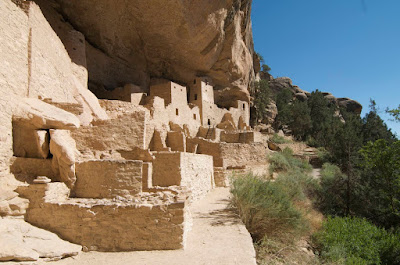 Cliff Palace, Mesa Verde National Park, Colorado
There are some 600 cliff dwellings in Mesa Verde National Park. Cliff Palace is the largest of them with 150 rooms, and was probably a kind of community centre. With the harsh conditions, the Ancestral Puebloans had to pool their resources to survive. Of the 150 rooms at Cliff Palace, many were for storing crops and meat. 23 of them were Kivas, round, sunken rooms used for ceremonial purposes. 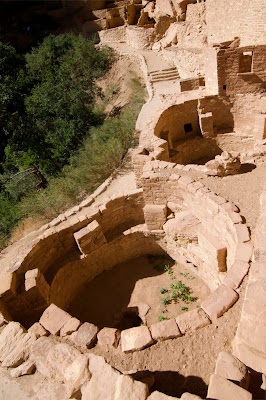 Kivas in Cliff Palace
Around 100 years later, the people that built these communities upped and left, never to return. Although there were severe droughts around this time, they'd survived plenty worse. It may have been that after some 700 years of tilling the same land, it could no longer support their burgeoning population. They spread south into Arizona and New Mexico and settled among their kin. No matter how sophisticated a race or people, once the natural resources of its land are exhausted, the options are either to move on, as the Puebloans did, or die out.

A hundred and fifty odd miles away, to the south and east, near the town of Taos, New Mexico, another group of people have assimilated their homes into the landscape: Hippies. And they call their homes Earthships. (Cue anti-hippy shudder and contempt. But I decide to check it out anyway).

An Earthship is a sustainable home made entirely of recycled materials that generates its own power and recycles its own waste. It is half buried in the ground to conserve heat, and has solar panels and wind turbines on the roof. Rainwater is harvested and treated then fed into a traditional plumbing system. Grey waste is used to water plants, then to flush toilets. Black waste goes into your standard septic tank. The walls are made of used car tires, packed with earth and filled out with old drink cans and bottles. 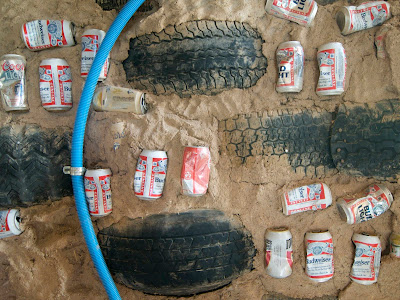 Another Brick in The Wall
Now the people who build and live in these things in hippy communes in the middle of a large field in New Mexico might strike you as being a little strange. They are. But at the same time, they would appear to be onto something. Is it so absurd to think that if you are building a new home, you should harness as much of the energy it will need from the wind and the sun? Or that using as many recycled materials as possible will reduce its impact upon the environment and cost you less money? 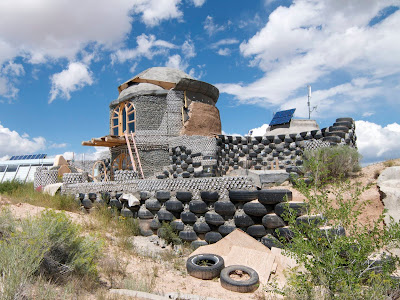 Not sure of the name of this one. Er, Tire Palace?
I'm not completely buying into all of this of course. I have absolutely no desire whatsoever to live in a house that looks like something out of Mad Max 2, or call my children things like "Rainbow" or "Snowflake". Hell, I'm a pure bred capitalist ex-bookie for God's sake. But the principles that underly what they're doing here must eventually be assimilated into mainstream society. The smartest architects are already designing and building homes that work in harmony with their immediate environment, not against it.

Ask the Ancestral Puebloans. A hundred years after building the most incredible homes and communities, they were gone. There's a limit to what the land can give us, and unless we're quick enough to devise new ways to enhance our return from what we've already taken, we'll be faced with the same two options as them. But there are 6.7 billion of us and counting, so repatriation could prove a bit more complicated...
Posted by Joe at 13:43