Southern Utah is almost back to back National Parks. I don't have time to see them all sadly, so work my way up the east side of the state and tick a few off the list. I'm still slap bang in the middle of the Colorado Plateau, so things don't change too much. Rather than stark contrasts, this is a place of subtle differences. Bridges and arches, land shaped by rivers and streams, or wind and rain.

This, in case you didn't know, is a natural bridge: 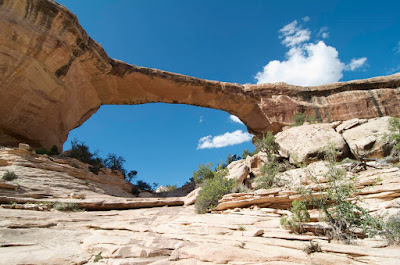 Owachomo Natural Bridge, Utah
It was formed, a bloody long time ago, by a meandering river, like the San Juan, photographed below. As the spring melt flooded, the water would crash into the walls of the river's tight bends. Over time, this impact smashes a hole, and the river changes its course, shortcutting the bend. As more water flows through, the hole widens and widens, until a natural bridge is formed. This one's pretty old - the river has long gone and it's looking a bit fragile. 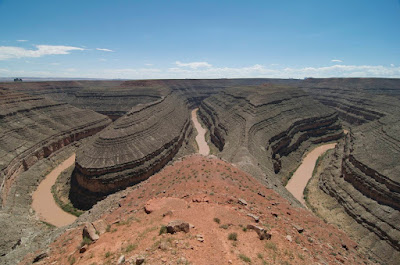 Goosenecks State Park, Utah
A hundred odd miles to the north, I learn the crucial difference between an arch and a bridge, at the appropriately named Arches National Park. This place is very different. Although it is now high desert, 300 million years ago, it was a sea, which evaporated, leaving 5000 foot deep salt deposits that were eventually covered in sand particles and turned to rock. The rock cracked, water got in and the salt finally dissolved. The wind and rain drive down the through the cracks, leaving huge fins, like flat pebbles standing on end. Some of these fins have weak spots, and over just a few thousand years, they crack and open into arches. There are 2000 of them in this park, at various stages of their evolution. 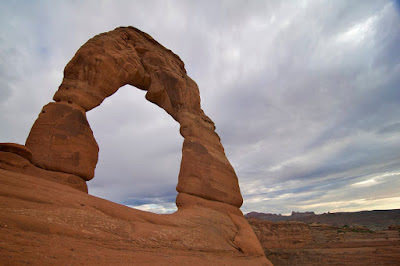 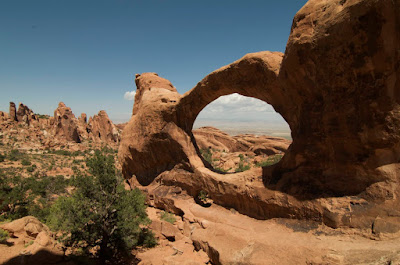 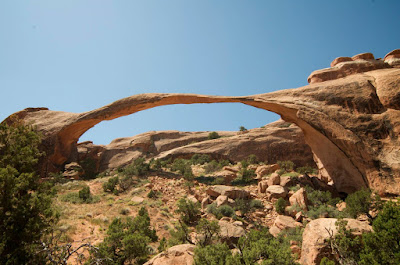 Landscape Arch
In 1991, a 60 foot section of Landscape Arch crashed to the ground as a result of the combined, painstaking efforts of wind, water, and gravity. You can see the thin section from where it fell above. The rest could come crashing down at any minute. In August 2008, the nearby Wall Arch collapsed overnight. All that remains now are the two opposing ends that once supported the pile of rocks that lie prone between them. 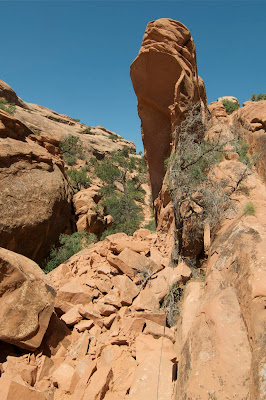 The remains of Wall Arch
You can see similar shapes all over the park, and one day all the arches will go the same way, just as new ones will evolve from solid fins. This all happens relatively quickly here, over just a few thousand years. Hiking and climbing through, over and among them you can see and feel the sense of gradual change. It's another gentle reminder that our lives barely last a heartbeat in the life of the planet.

Just a few miles away, another park, Canyonlands, and a completely different topography. We're back to canyons again - at the confluence of the Green and Colorado rivers. It might not be as famous as the Grand Canyon, but it lacks something that makes it superior in my eyes; hoards of tourists. Even hiking the Grand View Trail, I only see a handful of other people. Sitting at the end, admiring the endless view, a raven swoops past, and I actually hear his wings whistling through the wind. 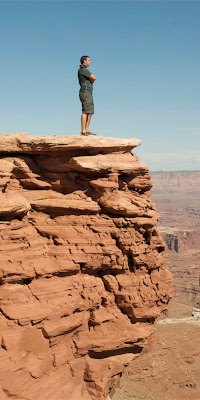