It took a few weeks, but I have finally hit a town in California that gives me the urge to stick some Beach Boys on the stereo. 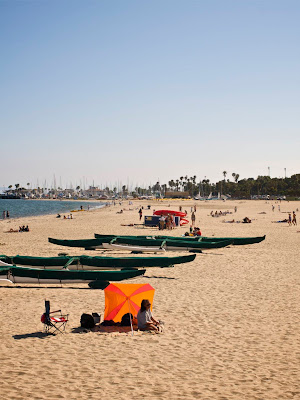 Santa Barbara is a lively seaside resort. This will sound ridiculous, because it is, but it feels sort of British. As I drove in on 101 I noted the sign displaying the population. Ooh, that's less than Worthing, I thought to myself. Then, when I saw the pier, well, I suddenly felt at home. (They must be worried about the twinning potential since they insist upon calling it a wharf and let cars drive down it). 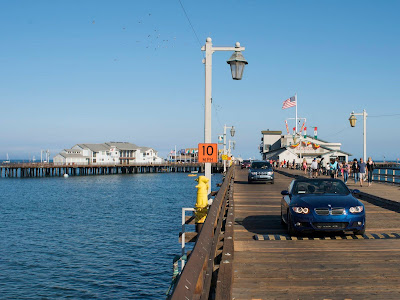 Admittedly, instead of lawn bowls or third rate putting greens, there are bikini clad beauties playing beach volleyball, and the souvenir shops are surf shops, and the food is mostly Mexican and good. Oh and the sun's shining, and the beach has sand - golden sand. And they didn't buy their palm trees on the internet. But there are enough similarities to make me feel comfortable. I like it here. Some guy is even fishing. I mean, how British is that? 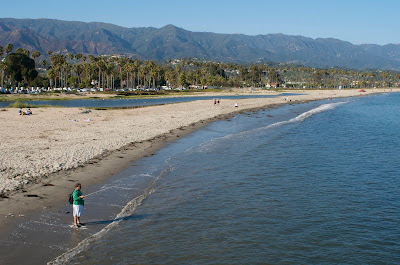 As the sun tootles off and the denizens of the town apply a little apres soleil, a bizarre but not unfamiliar change occurs. People are drawn away from the beach to their homes and hotel rooms, only to re-emerge shortly after, all dressed up and apparently instantly intoxicated. Downtown throngs with people; families, tarted up girls, buttoned up chavs (I've heard more British accents here than anywhere else) and lots of Mexicans. The only section of society more heavily represented than the mariachi bands whose monotonous melancholy fills the air, are the Santa Barbara Police Department.

Maybe they're here on account of the fact that for about six blocks, downtown is bar after bar after bar. People are spilling all over the sidewalk; tourists, holidaymakers, shifty guys in hoodies. I don't see any trouble, I don't even sniff it in the air like you usually do. Maybe it's the stench of booze that masks it, or maybe having that many cops around really does work.

Or maybe there are so many of them that they just don't have anything to do. I cross the street a second before the light turns green and am pounced upon by a female police officer. I humour her aggressive tactics and do as I'm told. In an effort to assert her authority and presumably de-humanize me she makes me sit on the kerbside while she spills out the usual bullshit. It would be somewhat ironic if after a lifetime of unpunished crime I should swing for jaywalking, so I grovel my way out of her notebook.

A block or so and a few red lights later and it still feels like your average English High Street on a Saturday night. There's a pub called The James Joyce and an O'Malleys. Then it dawns on me: It's basically what Worthing, or Torquay (come on lads, comments please) would be if it had sun, sand, a Mexican population and highly strung misandrist police officers.

None of this is meant as a criticism, because I genuinely like this place. By day. By day I'm whistling Little Deuce Coup and Wouldn't it be Nice and smiling and kicking sand out of my thongs. But when darkness falls, I'm humming another Beach Boys number: In My Room. Because frankly, that's where I'd rather be.
Posted by Joe at 00:38