I was pretty sure the drive from Santa Barbara down to Los Angeles would have been a bit like playing Out Run. In places, like Malibu, it was. But I don't remember Out Run having traffic lights, or quite so many other cars on the road.

I actually skipped my way along the Pacific Coast Highway and left the City of the Angels in my wake. I'll come back to it before I leave. But I've spent the last few days just south of the city in Huntington Beach, Orange County. And I love it.

The US Open of Surfing is on, so it is insanely busy. Luckily I have the top down when I roll into town and crawl among the traffic along the beach. With all that flesh on display it's a wonder the guy in front's bumper remains intact. Santa Barbara was a mere whiff of the real Southern California. This place is it, and more. You'll need a good pair of sunglasses.

Like everywhere else along the coast, the mornings are murky. I have now discovered this is a Marine Layer and that it lingers until the heat of the sun burns it off around midday. We watched some surfing heats on Saturday morning, along with a good few thousand other people. Never in my life have I seen such an assortment of massive digital cameras and absurd zoom lenses.

I don't carry a zoom, so taking pictures of surfers is out for me. And looking at everyone with all their gear, I wonder what the bloody point is anyway. Splash out about three grand, get up early enough for a spot on the pier, shoot your way through a couple of batteries, and you WILL get good pictures of guys surfing. A couple of hours on photoshop and your friends, and the flickr community, will be swooning over your genius. Where's the fun in that? Does it make you a good photographer? No. 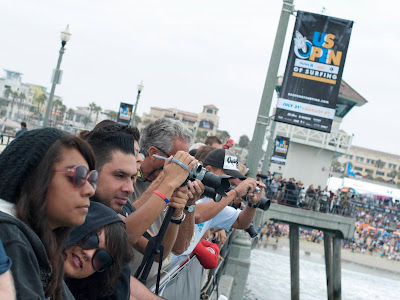 Shark bait
The place is swarming with flesh. Guys who presumably spend their entire life in the gym are stalking about purposefully flexing their bare chests. The girls don't need to flex theirs, are wearing diminutive bikinis and their sun sizzled skin is everywhere you turn. All of which means the disappointment of the following sentence will be considerable: I don't have any photographs from Huntington Beach.

I will have though. A few days ago I bought myself an old Nikon D2000 and loaded it with black and white film. You, like me, will just have to wait.
Posted by Joe at 10:33