A bridge too far

There were times during the long drive down the coast towards San Francisco when my resolve would falter momentarily. The monotony of driving having a weary, metronomic effect. It was always the same image I conjured to repel the encroaching gloom: driving over the Golden Gate Bridge. Sun blazing, roof down.

Alas, it was not to be. Mother nature, in spite of all the nice things I've said about her on the last couple of weeks, had draped a drab grey sky over proceedings. The roof stayed up, the song remained the same.

The bridge is one of the most immediately recognisable structures in the world. And so it sits there, spanning the Golden Gate, serving two purposes: getting people from Marin County to San Francisco, and being photographed. By everyone. The gauntlet is laid - in my few days in San Francisco, I must bag just one decent photo to hang over the fireplace.

Before crossing it, I scouted around and took a few snaps. It was a crap day; the sky was flat, white and lifeless. From Horseshoe Bay I get this one, which is okay. Not that many people make the trek down here so it's a bit different. 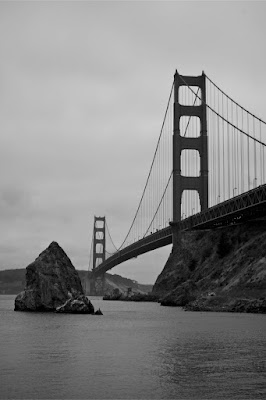 Most people are up on Marin Head taking their pictures. I go up there a total of three times in all - here are three similar pictures taken at different times on different days. I like the boat in the first one, and probably prefer the narrower angle. Only in the evening when the twilight hits the steel do you get the true colours. Passing by at the wrong time of day, or on the wrong day, and you're walking away with a shit photo. 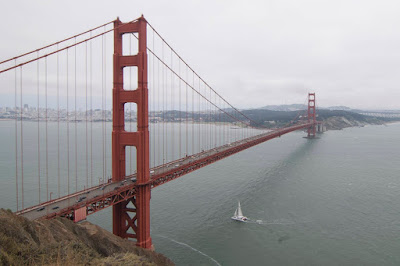 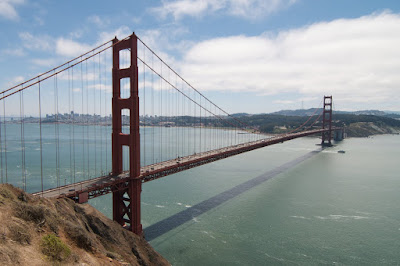 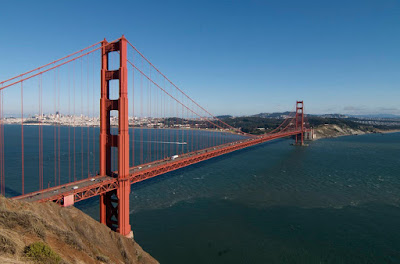 Still awake? Boring aren't they. Millions and millions of people have the exact same pictures, though perhaps with a few family members posing moronically or 'crazy' friends striking hilarious poses.

On the south side at twilight there are throngs of photographers packing serious gear. I don't really like any of the pictures I take, except for this one looking up. Looking back I seriously regret not walking across the bloody thing to get a different perspective. Many of the qualities that help produce a good photograph; like time, patience, perseverance and perspective, serve you pretty well in life too. I have plenty of the former, less of the middle two and I'm getting more of the latter. 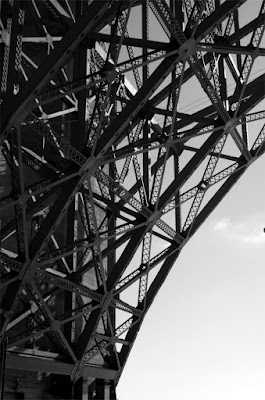 I think I was obsessed with getting a big shot of the whole bridge; something conveying its size and grandeur. I even scaled my way down the side of a pretty precarious cliff in the hope of a different elevation, only to discover that at the furthest point, the span completely obscured the cityscape and the pictures were rubbish. Back up at the top, I was just about to leave when I spotted something - a very small hole in the chain link fence that borders the viewpoint. Just big enough to shove a camera through, and with my wide angle, maybe I can get the picture I've been hoping for. The bridge on its own will never be enough. 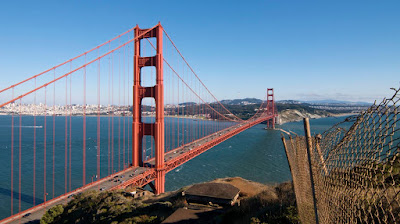 I won't pretend I thought about it as I made my way over to the little hole in the fence but every picture tells a story. This one features two great triumphs of design and engineering, both fashioned out of steel. The more famous and photographed one was built to enhance man's ability to move freely about the earth; the other to curtail it.
Posted by Joe at 19:07