When I was in Texas, I rented a car. It was a Dodge Avenger. Quite what it was supposed to be "avenging" is anyone's guess. Some extremely trivial infraction, it would seem. Had my first ever car not been a Peugeot 306, I would have no hesitation in declaring it the shittest thing I have ever driven. It handled like a cross channel ferry and accelerated at roughly the pace of the local armadillos.

Yesterday morning, I began the "road trip" portion of my trip (I cringe when I hear that term, sorry). It had already occurred to me that undertaking a trip down the pacific coast of the United States in such a ve-hicle would be nothing short of a crime. When I was in Australia last year, I bought myself a Nissan Skyline R33 since I wanted to blend in: 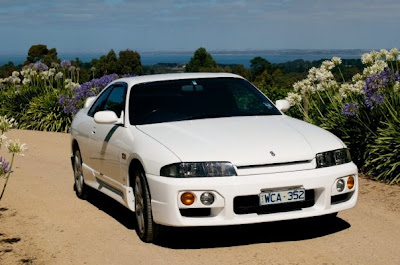 But this is America. Driving a Nissan around here would be like taking a fart to a shitfight. No no no. If you want to drive across, around or through America, you're going to need a car with a special kind of symbol on the front. And that symbol looks like this: 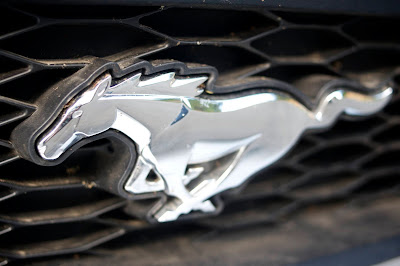 And if you're anticipating some good weather, and used to play Out Run on the ZX Spectrum (tape version) when you were a kid, then the rest of it should probably look like this: 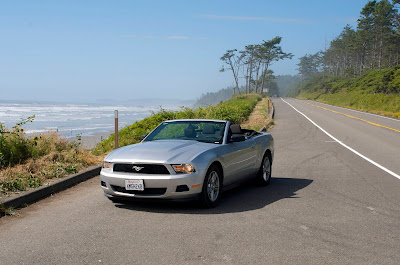 Silver wouldn't have been my first choice but I'm not complaining. The 'stang, as I am affectionately calling it, has a 3.7 litre V6 that absolutely roars when you stick your foot down, though it would appear to be mechanically limited to 115 mph. At one point, snaking around Lake Crescent in Olympic Park, Washington with the top down, I saw a Golf Cabriolet up ahead. Long blonde hair flowed from some beauty in the drivers' seat, and my heart raced in anticipation of a Bond style chase that would culminate in an exotic and potentially deadly tryst. Sadly it wasn't so much Out Run as School Run, and after five minutes of being stuck behind her Miss Daisy style driving, I was rueing the day she ever got behind the wheel.

Fifty miles later, and I was rueing the fact that I no longer possessed my cellphone. One quick call revealed that, mercifully, it was safe in the custody of the Port Townsend Police Department. Port Townsend: a mere 110 miles back from whence I came. So the first day of my "road trip" involved driving 220 pointless miles and staying in a motel only marginally further along from where I'd left ten hours previously. At least I did it in a decent car - if I'd been in the Avenger, I'd have probably just driven it straight into the sea.
Posted by Joe at 19:55