Take me out to the ball game

Baseball. I can't say it's ever done a lot for me, except when multi millionaires were gambling on it, but in the absence of any better ideas, I got myself along to Safeco Field on Saturday night to watch the Seattle Mariners take on the New York Yankees. At least now I know why I couldn't get a hotel in town. 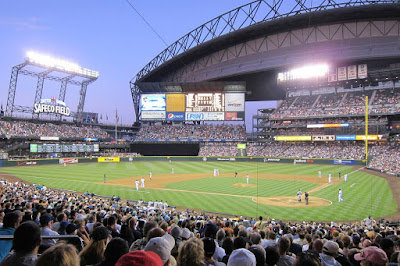 Since half of the world's population owns some form of Yankees apparel, I decide to support the home team. I'd heard before that a ball game is as much about stuffing your face as it is about watching sport. I manage to resist the lure of the $8 hot dogs for the time being, and the endless procession of people selling shit up and down the aisles.

I join about halfway through the second innings, with the scores tantalisingly locked at 0-0. It isn't until the bottom of the sixth that the Mariners actually manage to hit the ball, by which time the Yankees have already powered into a one run lead. I'm beginning to think it would have been more interesting to come down earlier in the day and watch the guys mowing those stripes into the pitch. 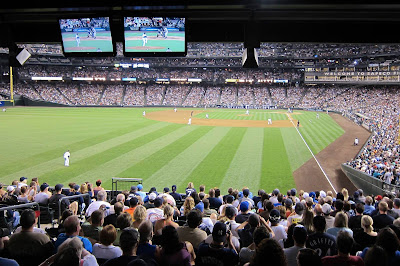 With the absence of drama in the middle, it's no wonder they're all so obsessed with statistics. The guy on first base is the first capricorn weighing less than 170lb to make over 50 appearances in a season. And the short stop is making his seventeenth appearance for the Mariners since the last time he ate chicken wings, which is an all time divisional record. When Fan Cam comes on in between the "action" the crowd go absolutely wild. Sitting in the stands with junk food detritus raining down around me, all I can really think of is the brilliant end to The Naked Gun. Strrrr-iiiii-ke.

Halfway through the seventh innings and tradition requires that the whole ground be upstanding as they play "Take me out to the ball game." I was thinking that just "Take me out" would probably do it - I can't even drink myself senseless as it costs $9 for a Bud Light and the guy selling them comes round about as often as the Mariners make contact with the ball.

To my utter astonishment, the game finally comes alive in the eighth innings when, more by luck than judgment, Seattle manage a home run with bases loaded, and so take a 4-1 lead. The whole place goes nuts, and there's a genuine atmosphere at last. When the final roar goes up, I'm almost at the train station. 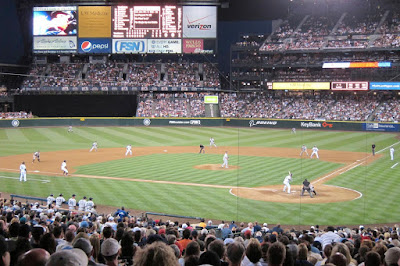 Bottom of the eighth, bases loaded...surely he'll hit it this time...
Now it seems obvious to me that there are a number of areas in which baseball could be dramatically improved as a sport, and I feel obliged to outline them below:

1. Fielders should not be allowed to use gloves to catch the ball. Not only are gloves for pussies, but it makes it impossible to drop the ball, making batting that much harder.

2. It is too hard to hit the ball, and making contact can only be a matter of luck and not skill. Make either the bat or the ball, or better still both, bigger.

3. They get through hundreds of balls a game. They should use just one, so that it takes on different characteristics as the match progresses.

4. The pitcher has a disproportionate influence on the game. Pitchers should be rotated more often, and each one limited to a certain number of deliveries.

5. The term "Home Run" is misleading. "Boundary" would be both more accurate and appropriate.

6. Having nine innings of just three outs wastes a phenomenal amount of time with teams changing round. Instead, have maybe just two innings, of say ten outs each.

8. They should use a red ball not a white one.

9. Having just a mythical square to aim at makes pitching, and the umpiring of pitching, difficult. Instead, there should have a physical target for the batsman to defend. Three sticks in the ground would suffice.

10. They all look very fetching in their uniforms, but would look a lot smarter if just dressed in white. Assuming, that is, that they were still able to divine which players were on their team.
Posted by Joe at 19:37