Welcome to The Rock

Surely the only thing worse than being imprisoned on a small rock in the middle of San Francisco Bay would be waking up at 6.30am to stand in the rain for an hour and a half in desperate hope of a standby Alcatraz ticket only to discover, when you finally step up to the window, that they just sold the last one. That's what the guy behind me in the queue had to go through this morning, the poor bastard. 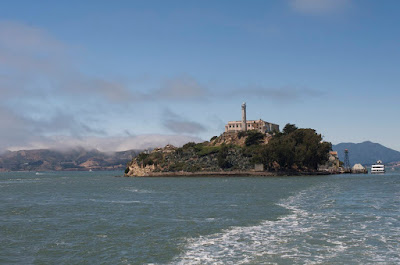 My knowledge of Alcatraz before today was limited to that provided by Escape from Alcatraz and The Rock. Escape is based on a true story of course, though the movie suggests they actually escaped, they almost certainly drowned. The Rock is preposterously fictitious but brilliantly entertaining. Sean Connery (looking remarkably like Billy Connolly) having escaped years earlier, breaks back into Alcatraz the way he broke out by negotiating a series of death defying fire jets and rotating blades, before opening a DOOR and letting thirty odd soldiers in, begging the audience to wonder why he didn't just escape through it in the first place.

The real thing is a little different. I was dreading the usual tourist crap, but they have an audio tour, voiced by former inmates and guards, that is genuinely brilliant. You get to wander about the old cellblock as you please, with these haunting stories and descriptions ringing in your ears. The strange thing is that, because of the movies and popular culture, you feel like you already know the place. It takes a little while of walking around before you realise that this is not a film set but the real thing. The ghosts of the people that lived here, dead or alive, are quite tangible.

They ham it up with the tales of the escape attempts, and they're what capture the imagination, and certainly Hollywood's imagination, but what really gets you about this place is the sense of desperation. The only thing worse than a prison; a prison that is quite literally isolated from the rest of society yet close enough to be within earshot. Knowing you are not free is one thing, knowing you might never be free, another.

The prisoners named corridors and areas after places on the outside. There's a Broadway and a Times Square. One cluster of cells enjoyed a lot of sunlight, and were the most coveted. Looking up through the windows, an inmate tells you how, on New Year's Eve, if the wind were blowing in the right direction, they could hear the party at the yacht club. The sound of women's laughter would drift in between the bars.

D Block was the maximum security wing, with prisoners kept in their cells for 24 hours a day. Six were hole cells, admitting no natural light. An inmate would rip a button from his prison tunic, drop it on the floor and spin round a few times, then look for it in the pitch black. When he found it, he'd do it again. It was the only way to while away the hours in the darkness.

The impact of light and dark is not unlike that which you find in the forests. The sunlight rations itself; those in darkness strive for light, and those lucky enough to glimpse it, reap the harvest. One can only imagine, and even then be tortured by, the desperation that must have accompanied those hours spent waiting and praying for the merest ray of light. 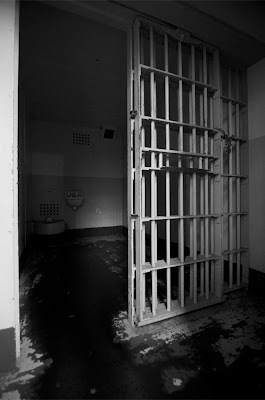 Release from this was something most were hopelessly unprepared for. The tour ends with the words of one of the lags, in a thick Italian American accent that I have transcribed without the apostrpohes that would otherwise have adorned every word:

I remember when they released me, I'd been locked up fifteen years, and during all this time I never had no visits, no letters, nothing, and I'm watching cars whizzing by and the people walking. Everything was moving too fast and I didn't know how to move with it. And then I remember how envious I was of these people, because they all had a destination. They were all going some place, and I didn't know where I was going.

And I was scared to death.

Six years after it was shut down as a Federal Penitentiary, Alcatraz was invaded by an unlikely alliance of Native American Indians. To them, it symbolised their plight, and the absurdity of the notion of men possessing land. With public sympathy, they remained for over a year and a half, before the harsh realities of life on a small rock that had forced the prison to close, made them vulnerable to a small but forceful nudge. Perhaps the greatest legacy of this phase of the Rock's history is a quote from Richard Oakes, a Mohawk who led the occupation:


Alcatraz is not an island...Alcatrz is an inspiration, it is the idea that you can control your own destiny, and self-determine your own future

I would chance that there are at least fifteen hundred men, most of them probably dead by now, who would tend to disagree with his enlightened words.
Posted by Joe at 23:58