The so called Peak of Vancouver, Grouse Mountain stands some 3,700 feet above the city and is a major tourist attraction. People fill the cable cars to the top and part with their thirty bucks to wander around in natural beauty and attend things like a "Lumberjack Show" (whatever that is). There are others, either more stupid, stubborn or poor, who choose an alternative route to the summit. The appropriately named Grouse Grind®.

The Grind involves ascending to the peak up a trail that climbs 2,800 feet in 1.8 miles. That's a 56% slope (30º), incorporating 2,830 steps fashioned out of rock and wood. Being an idiot, and in the absence of anything better to do with my time, I thought I'd tackle this, and try and beat the average time of an hour and a half (the record is 25 minutes, set by some nutter).

Things start out easily enough. Mercifully, the route is shaded, I am dressed for the occasion, and have plenty of water. The stopwatch is running, and I plan on making a solid, steady pace. Like most plans, this soon goes out of the window. Ten minutes in and I'm breathing pretty damn quickly. The adrenalin has flooded my calf muscles, my mouth is parched, and I need a breather. I begin working out how far I've covered, how much left. A pointless exercise. A good twenty five minutes in, knackered, and I pass this sign: 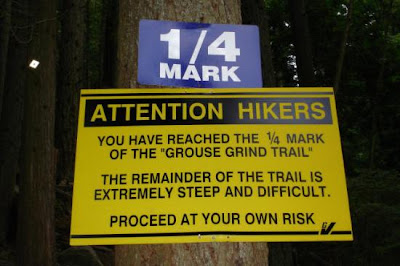 I've never felt like quitting anything more. Shortly after, I pass a girl coming down who assures me it gets easier the further you go. Whoever she was, she lied through her teeth, but I'd still like to thank her for it. With plenty of breathers along the way, and only knowingly overtaken by "serious" athletes, I finally made it to the top in 1:15. Whilst pretty weak by most people's standards, given the absence of any cardiovascular exercise in the last year (or is that decade) of my life, I'll take it. There's one other thing I'll take too, and that's the cable car down... 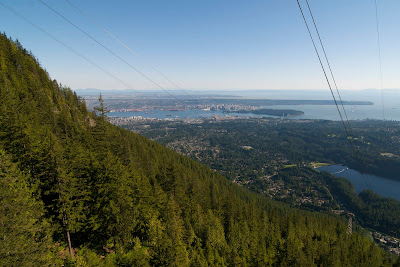