For the next three or four weeks, bar a few brief inland sorties, I will be hugging the coast of the Pacific Ocean. My first glimpse of it since I left Lima back in May came at Ruby Beach on the Washington coast, and it looked very different.

You have to walk through a forest of coastal firs to get to the beach itself, which is littered with driftwood. It's the same story all along the coast as I make my way down to Oregon. Every stretch of beach is piled with dead trees, brought to the ocean by the rain and the rivers, tossed about and eventually left on the shore to bake in the sun.The same trees that stand proudly between sea and land lie broken in their own shadows. So tall and uniform in life, they take on all manner of aspects in their almost petrified death. I wander around looking for the strangest, tossing aside those logs that are strewn in my path like a young Geoff Capes. 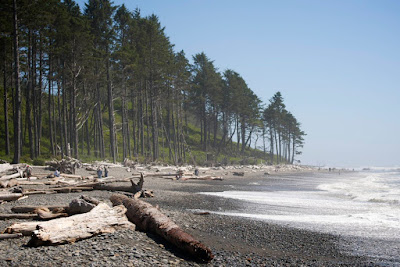 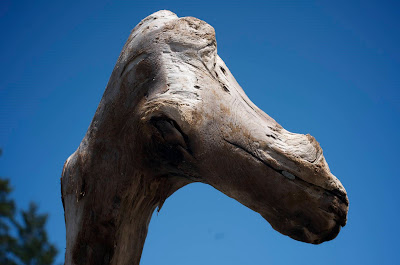 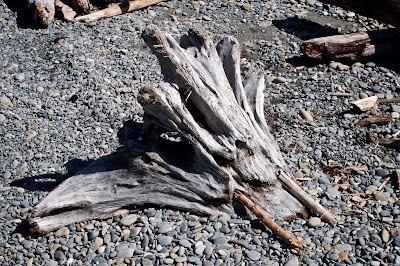 The first thing to strike me about the ocean itself is its force. Sea stacks testify to its power - the remnants of promontories eroded away by the relentless pounding of the surf. Rocky land tunnelled through then completely isolated from the land over thousands of years. No reason nor purpose to the destruction, just the inevitable result of a seemingly irresistible force meeting an apparently, but apparently not indestructible object.

The isolation of the rock is brought about solely by the movement of water. And yet when they first meet, when the huge body of water strikes the land and dissipates into thousands of imperceptibly tiny droplets, it would seem as though the rock won. Only in the fullness of time, and with the cumulation of that relentless impact, does its true power manifest itself. A few feet from where the surf crashes into the rocks, that same water, pooled around the pebbles it has smoothed away over the centuries, lies perfectly, harmlessly still. 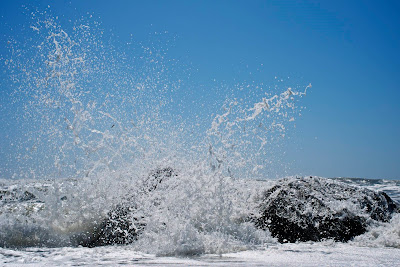 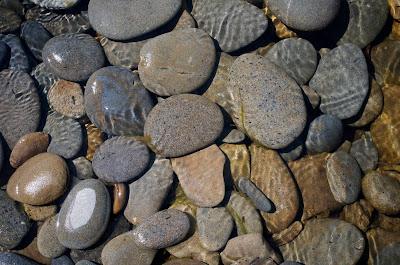 The sea never sleeps. On Tuesday night, by Lake Quinault, I thought I could hear the ocean in the distance, as though a tiny shell were pressed to my ear. Last night, on the Long Beach Peninsula, I camped barely a hundred yards from its edge and the sound was deafening, all night long. The spray hammered down on my little canvas house. It is almost frightening, and certainly humbling, to feel Mother Nature so close, and with nothing but a two hundred dollar tent to protect me from her irresistible force.
Posted by Joe at 18:39