I've never been one to fight my own body. It wants sleep, it gets sleep. But after three days of doing only fractionally more than nothing, I need something to shake me out of my lethargy. So I get a massage, eat an unbelievably healthy breakfast (Twisted Fork - awesome) and hire a bike for the day.

Riding a bike these days pretty much obliges one to look like a twat. In the past this might have been enough to stop me. Not any more. I've learnt that looking like a twat and being a twat are not the same thing (though they frequently overlap). I genuinely don't care any more, so helmet up and head off.

There are some fairly ominous looking clouds lurking over the city, making things seem a little dull. There's plenty to look at cycling along the seawall, but with that moody sky, the pictures are defiantly black and white. 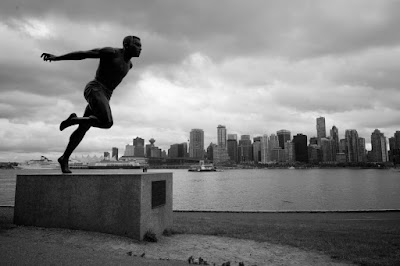 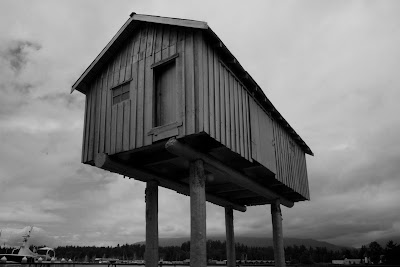 My plan - head over to North Vancouver to Capilano Park. This entails cycling up a bloody massive hill, at the top of which I take this picture, just to prove how stupid I look, after sitting down for about ten minutes to get my breath back. 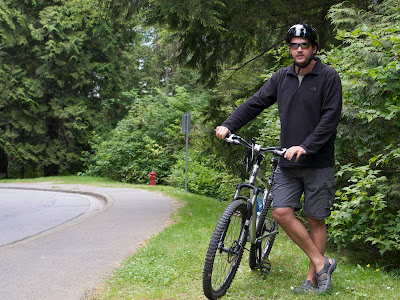 What goes up must come down. My worry is that there are going to be some pretty hefty downs to be re-upped in the next couple of hours. The bridge over Burrard Inlet is massive. Coming down the other side, I realise it is going to take some effort to get back up over it. And then another Ditchling Beacon awaits en route to the park. By the time I get there I am completely knackered.

The park itself contains the Capilano Suspension Bridge, British Columbia's first ever tourist attraction. I bet it didn't cost $35 to get in back when it opened. It's a total rip off, naturally. The bridge itself is pretty trippy, when people stop taking pictures and clambering over each other to hold on to the sides. And there's some cool forest to look around, but it's pretty small and all laid out in tracks and treetop pathways. But it's green, and is a strange contrast to downtown, which is, after all, not that far away. 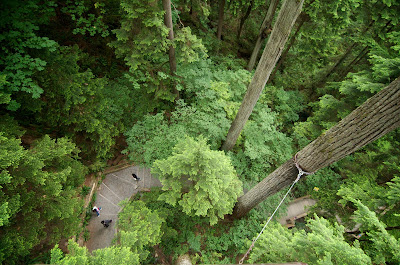 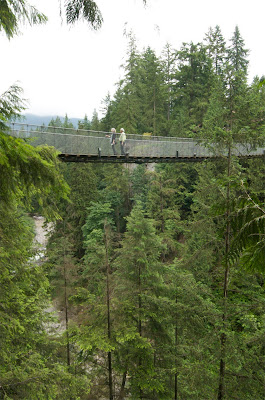 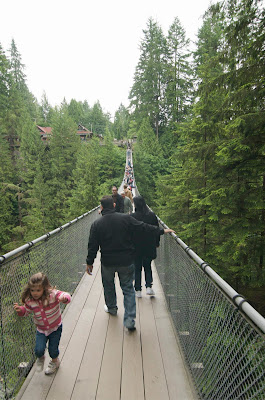 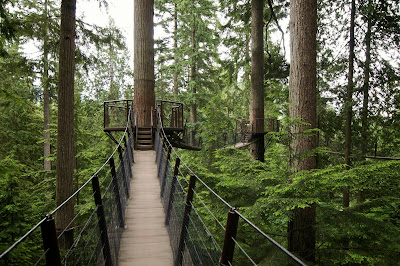 I finally get back to Stanley Park, having made it up the bridge in one piece and, remarkably, without quitting. I ride leisurely around the seawall again, lapping what has to be one of the most beautiful urban parks in the world. It's packed full of people; on bikes, rollerblades and the beaches. It's cleverly laid out, well organised, spacious and tranquil.

By the time I wind my way back to where I started, I am in urgent need of two things: a buttock transplant and a cold beer. I compromise by choosing the softest looking bar stool from which to enjoy my reward, and I'm back in the game.
Posted by Joe at 13:57