The first hundred miles or so of California are dominated by the Redwoods. Once you are past Crescent City, which sort of feels like it's there because there has to be a town somewhere, there are just a few little clusters of buildings masquerading as villages along the way.

Most people are here for the trees. Those that aren't camping or in their RVs head for Trees of Mystery, a kind of forest theme park, somewhat unmissable form the highway by virtue of a 50-foot high statue of mythical lumberjack Paul Bunyan and his blue ox, Babe. I skip the ride through the forest but stop to marvel at the statue. In what is surely one of the world's most interesting jobs, some guy is employed as the voice of the giant, exchanging pleasantries and engaging in idle chit-chat with the assembled masses in the parking lot. 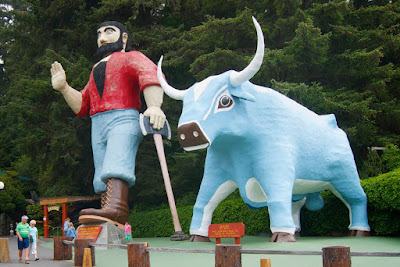 A little further on, and after a restorative breakfast of Biscuits and Gravy in the smattering of buildings and a gas station that calls itself Klamath, I hit the town of Arcata. It feels, well, Californian. An eclectic mix of students and old hippies are milling around the main town square where a band is playing (it is Thursday lunchtime after all). People are wearing tie dye shirts, and some of the older ones look like they didn't bother getting changed after Woodstock. There are a few Victorian buildings but the coolest is the art deco cinema. (Showing The Thing! Awesome). 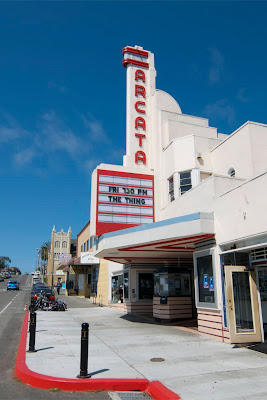 South of Arcata is the equally cool town of Eureka, with its historic district and quaint little bookshops and cafes. I press on west, away from 101, and with all the campsites booked up, crash in a real bed in the strange little enclave of Ferndale. It's an old dairy town, that has preserved an extremely antiquated feel, presumably for touristic reasons, since it sells itself as a "Victorian Village" and hands you a souvenir "ye olde newspaper" when you check in. Hmmm.

The region west and south of Ferndale is known as the Lost Coast. It's a wild, desolate, bleak but beautiful place, completely undeveloped. With just a few small hamlets, inhospitable terrain and a thick sea fret that hardly ever relents, there are no highways, and no reason for them. Inside the mist, the colours only seem to penetrate the foreground, and the rest of the world beyond is just a palette of grey. 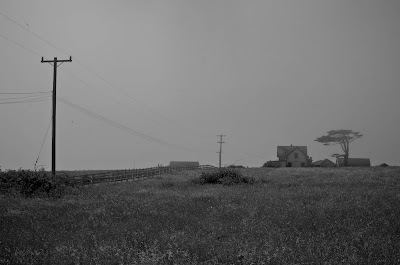 The road twists and turns through stunning scenery, occasionally climbing high enough to afford a vista over the low lying cloud, when Grassy green pine forests give way to brambles and coarse, mustard yellow scrubs, while the roads are lined with bright azaleas and a glorious clear blue sky lets the sun warm you. Descend into the mist once more, the sun gives up the ghost and the colours fade. In the fog, a stag bounded out of a hedgerow in front of me, but instead of cutting in front of my braking car, he skipped alongside me for quite some distance before acknowledging me, or so it seemed, with a doff of the antlers, and disappearing into the trees once more.

Edging away from the coast, the fret clears, and the road finally, after so many ups and downs, sheer drops and hairpin turns, rolls me right into the Humboldt State Park, where I drive another thirty miles or so in and out of the biggest Redwoods in California. South of the Avenue of the Giants, the stretch of road that runs through the forest, I take Highway 1 back out to the coast. It's yet more twists and turns, and I'm beginning to feel like I'm playing an arcade game rather than actually driving. When I finally hit the ocean, after four hours behind the wheel, I manage to stop in a mist free patch and enjoy my first proper glimpse of the Lost Coast that I've spent the whole bloody morning looking for. 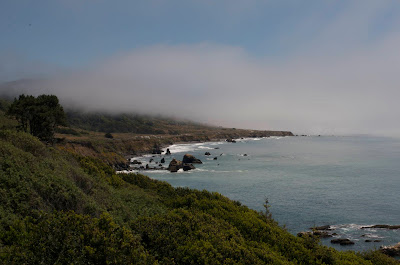