Uncle SAM does the best he can

Art galleries are a pretty sure fire bet if you've got a few hours to kill in a city. The Seattle Art Museum (SAM) is meant to be a bit tasty, so I shuffle along there of a Saturday afternoon.

Art galleries present a number of photographic challenges. Are you photographing works of art, or photographing the manner in which they are curated? Or are you just snooping around taking pictures of the other punters? Or all three? I love taking pictures in these places. In fact, what I think is one of my best pics was taken in MOMA in Brisbane last year, and I will shamelessly exhibit it here for your delectation: 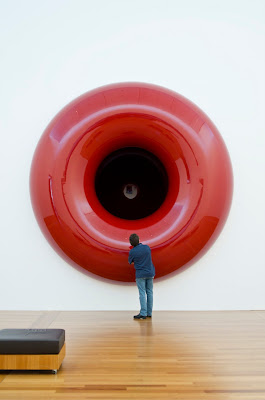 I just love its starkness, and the guy's almost childlike inquisitiveness. You look at it and almost expect some giant sound to boom out and deafen him for his curiosity. I got the same feeling looking at the work of art below in SAM, but despite loitering around for ages, no-one stepped up to display the necessary interest: 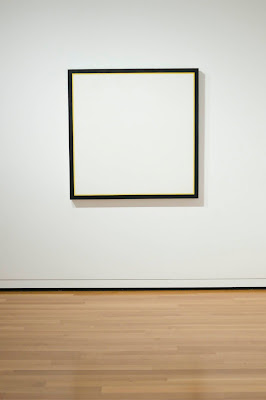 SAM exhibits a range of works from all around the world, with notable gems from the pacific northwest, though nothing of the scale of MOA in Vancouver. I like the juxtaposition of this model in the crazy mask and the TV in the background though: 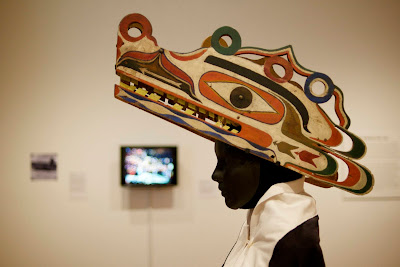 But surely the best work of art in the whole place is Some/One by Do-Ho Suh. A massive open suit of armour made entirely of military dog tags, it fans out for miles, taking up most of the room. It's incredibly impressive. I like this shot of it with the ends of the arms cut off so it fills the frame. It was the best way I could think of conveying its size and scope: 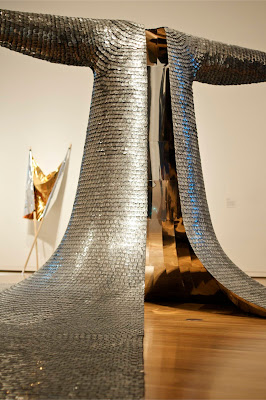 On the top floor there is an exhibition named Kurt. I'm not sure which work experience guy they got to write the copy introducing it, but I'll let him do the talking:

"Grunge music is about as universally synonymous with modern-day Seattle as Starbucks and Microsoft. The late Nirvana frontman Kurt Cobain is easily the most recognizable icon from this period, famous for his heartrending lyrics, agressive left-handed guitar playing, scraggy blond looks and premature demise".

Technically there is nothing wrong with these two sentences. They were clearly written by either an idiot or a comic genius who slipped them past his boss. I'll spare you most of the next paragraph, but throughout it he constantly refers to Cobain.

"The exhibition Kurt, titled simply with the musician's distinctively spelled first name, charts his ascendance into the pantheon of one-named American superstars such as Marilyn and Elvis".

I'm struggling to name the other members of POONAS (Pantheon Of One Named American Superstars) right now. I got Buddy, but it took me a while. I think it's as much about unique christian names as talent, so to my mind, the outstanding (and ongoing) career of Kurt Russell should be enough to keep Cobain locked out for the time being.

The exhibition itself is fittingly rubbish. Smells Like Teen Spirit is playing, there are pitifully few photographs, and a lot of dross that looks like it was scribbled on bedroom walls by manic depressive teenagers. One room contains an enormous Curt, sorry Kurt, Cobain head lying on its side. Which is strange, because I thought he'd blown his brains out with a 12-bore. Surely something by Jackson Pollock would have been more realistic - some porridge and tomato ketchup splattered around the walls perhaps.

Bizarrely enough, this is the only part of the museum where photography is prohibited. Like I'd want to take pictures of this crap? I still manage to get told off for taking a picture of the exhibition's crowning glory though, despite my protestations that it isn't actually part of it: 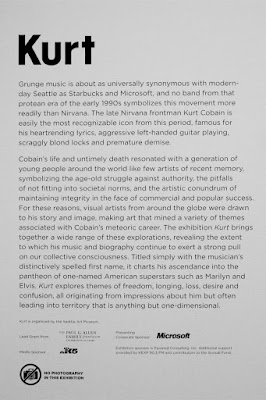