It's a nice day, the sun's shining, and I'm in Seattle. I've been here before, I just chose not to mention it. I wonder what else I've been hiding from you?

That was two weeks ago on my way to Vancouver Island and I had a few hours to kill waiting for the ferry. I was laden with bags, exhausted from my early morning flight in from Houston, and wasn't really in the mood. But I pulled myself together and found my way to Pike's Place Market. There are hundreds of little hole in the wall restaurants, oyster bars and chowder joints, as well as a farmers' market, fishmongers everywhere, and all manner of other stalls. It's a foodie's paradise (and a photographer's it would seem, since everyone's packing an SLR). 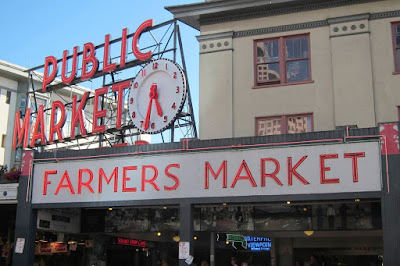 Back then, I had lunch at Pike's Place Chowder - a crab roll and scallop chowder. They like their chowder super creamy here - too creamy for my liking. It tasted like a can of condensed cream of mushroom soup (minus the mushrooms), drowning out any trace of the scallops' flavour. I can think of at least one cookery school owner who would probably approve!

This time I try a spot of lunch at Emmett Watson's Oyster Bar. I tackle half a dozen oysters (two each from three different local beds), some cold shrimp and a dry smoked salmon with havarti. They're all incredible, but the shrimp win; they're fat, meaty and delicious. They taste so much better when they're cold. Today I went down to the dockside and ate at Anthony's Fish Bar. Great fish tacos, one Mahi Mahi and one Rockfish. The Mahi was way better - too much mango salsa in the other. But it looked good. 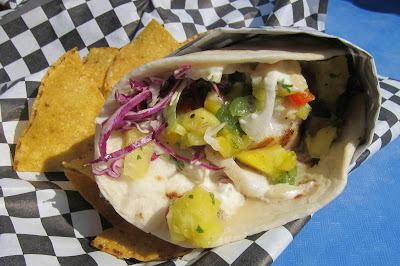 Seattle's got a good rep for its coffee, despite the fact that it was the birthplace of Starbucks. People crowd around the original store, though I can't make out if they're waiting to go in or watching the buskers. I probably should go in, but don't. Maybe it's the story I once read about there being a tap permanently running in every Starbucks in the world, wasting 23 million litres a day. I get a really good americano in Uptown Espresso in Belltown instead. 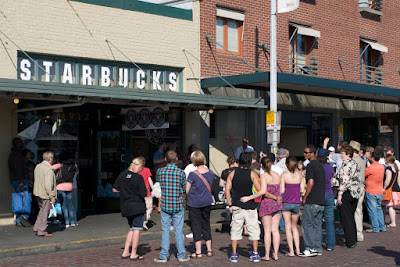 The first ever Starbucks. (Is that good or bad)?
I like Seattle. It's got a good feel to it. If I were bound here for another week or so like I was in Vancouver, I'd probably grow to like it even more. But not a lot more. That might be because I am planted out near the airport in a ghettoised Travelodge next door to a rapper infested row of buildings comprising a strip club called Deja Vu, a bar that was playing music so angry I had to cross the street in case I got struck by a stray bullet, and a strip club called Deja Vu. If I was in downtown or Capitol Hill, it might well be a different story, but you can only work with what you're got.

This will no doubt incur the wrath of the locals, but there's not actually a lot to do in Seattle, unless you like getting elevators up big towers, going on Duck tours or getting wasted. I've asked enough of them what's good to do, and they don't exactly inundate you with ideas. So I utilise my internal resources, and come up with a few of my own...
Posted by Joe at 14:52