A kind of magic

Having brought the car situation firmly under control, I took care of accommodation worries for the next eight weeks before I left Seattle. I dropped into the local REI and bought myself a tent, sleeping bag, floor mat and a couple of pillows. May a canopy of stars be my majestical roof.

I never went camping as a child, so it doesn't really hold any magic for me. The kind of magic you need to make sleeping in an area the size of Alec Guinness's 'cooler' in Bridge on the River Kwai seem like a good idea. To make you wilfully, gleefully even, subject yourself to being bitten, pissed on and generally set about by a host of God's tiny creatures you didn't even know existed, and do so in the absence of every convenience, modern or otherwise, that man has ever deigned to create. But hey, you've got to start somewhere.

I make it as far as Quinault Lake in the Olympic National Park, Washington, where I'm planning to bed down for the night. Driving through the forest, I'm thinking Deliverance, laced with a bit of Carry On Camping for comic effect. I quickly come to my senses and pull up at the Rain Forest Lodge and enquire into the availability of rooms. Then I man up, tell them where to stick their $130 and find myself a pitch down by the lake. Fifteen head scratching minutes later and the tent is up, with only a few minor complications. 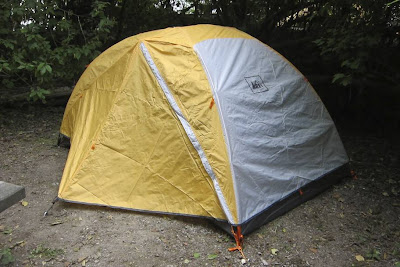 The campground itself is tiny - just five plots, a car park and a hole in the ground. But each one is nicely secluded and right on the edge of the lake. I crack open a beer and sit back to watch the sunset. A family camped down the end set off in a canoe to paddle around the perfectly still waters as the sun, already slipped from sight, casts its last rays into the nascent night sky. In that brief moment, I can't honestly think of anywhere in the world I would rather be. 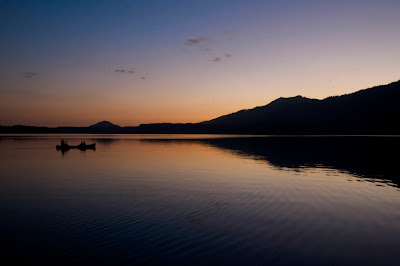 As darkness finally envelops us, I retire for the night. Later on I make a mental note not to drink more than three beers when camping, since getting up for a piss involves clothing oneself in an extremely confined space before negotiating a series of obstacles only slightly less challenging than the Krypton Factor assault course. Nonetheless, and to my lasting surprise, I actually sleep extremely well. All to be heard are the sounds of nature: the tweeting of the birds as they too drift off to sleep, the croaking of frogs and the occasional call of a desperate cougar. I can hear the calm lake lapping gently at the shore, and in the distance, I am certain, the faint sound of the Pacific Ocean as it pounds the coast.

I wake twice in the night, in contrasting circumstances. First up, my neighbour Richard and his son, Richard III (I shit you not*), are having raccoon trouble. They attempt to rectify this by whisper-shouting to one another - "F**king 'coons dad" - and then throwing large heavy objects, presumably logs, wherever they think the little blighters might be. Strangely, since I am only ten feet away, they seem to be leaving me alone (the raccoons, not the pair of Dicks).

The next time I wake it is to the sound of dawn slowly breaking in the temperate rainforest around me. As the animals stir themselves into life, it is as though their combined calls are beckoning the sun forth from its daily hiatus. It's a unique experience, and quite wondrous for me by virtue of the fact that having enjoyed it for five minutes, I stick some earplugs in and miraculously fall asleep for another five hours. And that, in itself, is a kind of Magic.

* In Seattle I heard a woman calling out to her two sons Hudson and Beckham. Good job Danny Shittu didn't marry a Spice Girl and move to LA, I thought.
Posted by Joe at 19:18