The wood, the trees

Trekking around the coastal forests of Washington and Oregon, one thing is abundantly clear; that the forest itself is a living, breathing thing. The trees, animals, fungi all exist as organs in one body. And that body, like ours, is fuelled by air and water.

The forest is in a state of constant flux - wind, rain and occasionally fire see to that. For the thousands of species that thrive here, it is the trees, of course, that make it what it is. Some may live to be hundreds of years old, others will be cut short in their prime - the wind accounting for 80% of all felled trees. 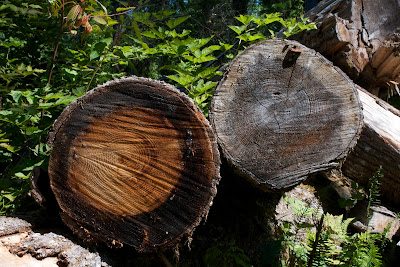 Life flourishes around the death of a tree. Some die, quite literally on their feet. Standing dead trees, or snags, provide habitat for many other living creatures. Woodpeckers, beetles, ants, salamanders, not to mention fungi, thrive around the curious standing skeletons. A 200 foot pine, after death, will take two centuries to finally reduce to a stump. 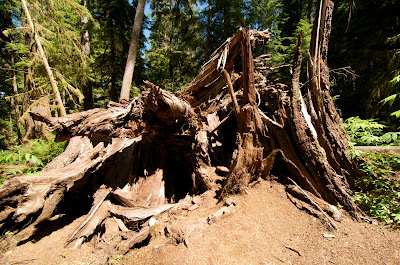 Fallen trees hold water like a sponge, so become a refuge for the parched inhabitants of the forest. Known as nursery logs, they provide the launchpad for the life of new trees. As the new trees grow over the felled, in time the nursery log decomposes beneath them - its death the catalyst for new life. In the forest you can see the trees that sprouted from such beginnings, the shape of the nursery log still visible in their roots, as though they were standing on stilts. 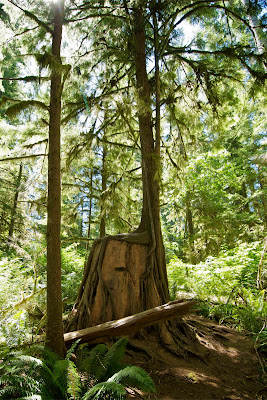 The rainforests of Washington State are incredibly damp. Moss grows on every single branch, draped over everything, as though some eager child had hung spiderwebs throughout the house one hallowe'en. It is an eerie sight. With the moisture too, come the fungi, every shape and size, on the forest floor, and clinging to the great trees themselves like limpets. 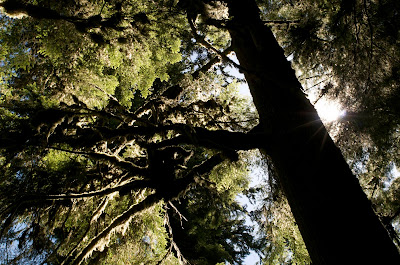 There are lessons to be learned in the dark depths of the forest. That so many species, great and small can coexist in such incredible, symbiotic harmony. And that the phenomenal power of nature restores and creates whenever it destroys: that life grows out of death. The reason for all this; the wind that brings the trees to the ground, and the water that feeds them.

In this great scheme, man lingers among the ants and the fungi that live in the shade of the mighty trees, whose giant shadows consume our own. Far greater than us are the tiny droplets of water that form on the fungus that clings to the tree; they truly are the giver of life. 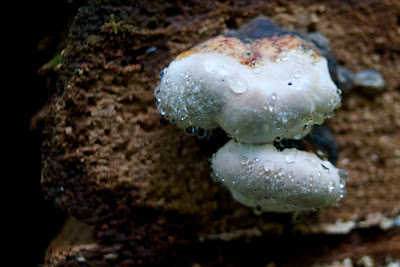