I can't leave Argentina without saying something about mate (ma-tay). Mate is to the Argentineans (and the Uruguayans, Paraguayans, Chileans, plus a few Bolivians and Brazilians who live near their borders) what tea once was to the English. The articulation of a nation's civility, in the form of leaves and water.

You need three things. Firstly, Yerba (the plant) dried and packaged. There are hundreds of varieties that range in bitterness (the drink is basically very bitter, though you can add sugar if you wish). The stalks of the plant are usually included in the mix, that looks not entirely dissimilar to good old 'normal' weed we used to smoke when I was young and stupid. 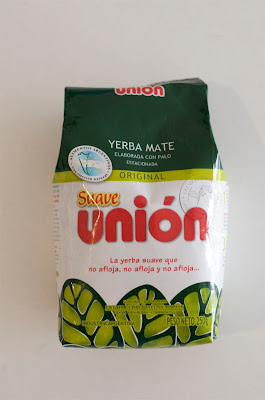 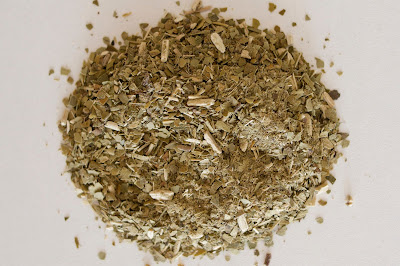 The dried leaves and stalks
Next you need a gourd or mate in which to prepare the brew, and a bombilla, a kind of metal straw through which to drink it. You almost fill it to the top with yerba, and bang it on your hand to remove any excess dust. In goes the first serving of hot (not boiling or boiled) water, and you're ready to drink your first mate. 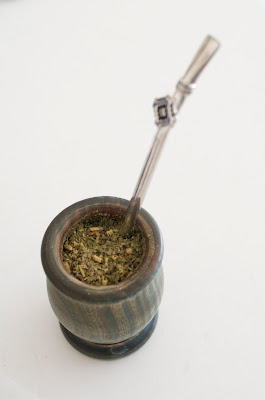 Mate, yerba and bombilla: the holy trinity
Drinking it feels a bit like smoking a pipe. I can't help but feel a little Holmesian as I pace up an down my apartment puzzling over the latest mysteries to which I turn my keen mind. 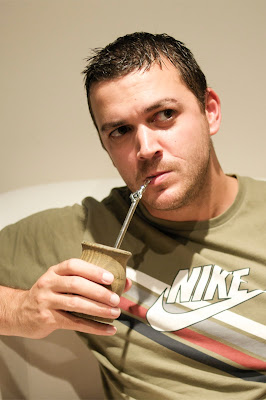 A three pipe problem
When the first mate is drunk, you just top up again, and keep going until it loses its flavour. Drink it at home or out and about, with gourd and flask of hot water tucked under one arm. The dexterity of Uruguayans in this respect is amazing, they carry their flask and mate no matter what else they are doing (riding motorbikes, horses, climbing ladders). Drink it alone, or better still, among friends, filling the gourd for each drink and passing it around like a peace pipe. If only we'd had yerba instead of spliffs when I was younger. I'd have made a great detective.
Posted by Joe at 15:24