Today’s blog started writing itself long before I woke up. A sensitive appraisal of the increasingly debilitating effect of my back trouble, entitled “Growing Pains”, it would have begun with a tear jerking description of me trying to put my socks on, followed by the fearful prospect of further suffering during a three and a half hour bus journey on Bolivia’s infamously treacherous roads, dowsed first by the prospect of a comfortable reclining seat, then sensationally reignited by this photograph: 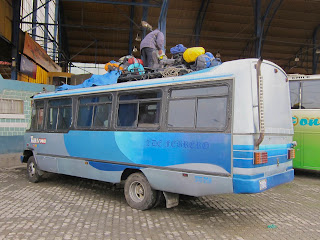 It would have documented the pain’s inexorable growth inside me throughout the journey, until I began gnawing through my fingers in agony, pausing only to cry out loud when my rucksack tumbled off the roof, down a hillside, and into the world’s most interesting lake. Then, possibly from a hospital bed, hours, and several hundred irritatingly well-chosen words later, it would have culminated in a slightly over dramatic yet hauntingly resonant and profound treatise on the nature of human suffering.

But it didn’t quite pan out like that. It did start with an unspeakably painful attempt to put my socks on. And that was followed by this photograph; 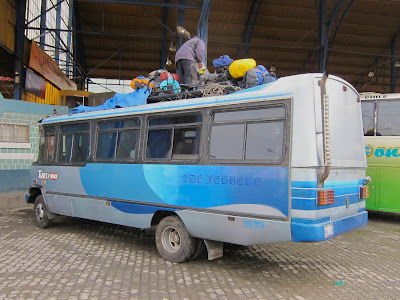 …taken just before 8am. But I craftily bagged the back row all to myself so I could lie down and alleviate the pain. Until about ten minutes into the journey that is, when we pulled over and the bus filled up with Bolivianos. The rucksack just about stayed where it was, despite a drastic swerve when we may or may not have killed a stray dog.

Two hours in, making sterling progress, and having replaced my deep depression with inexplicable and hopelessly unjustified optimism, we came to an abrupt halt. Unbeknown to me, the journey entails crossing a short stretch of water. On these barges: 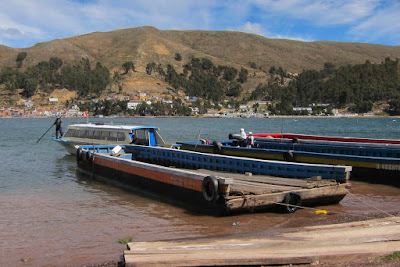 There is a long queue of cars, buses and coaches. We wander down to the water’s edge to investigate, but nothing’s happening. We can’t work out why. Eventually, and to our astonishment, we discover the lake is considered too choppy for a crossing. When can we cross? “No se. Mas tarde, tal vez. O mañana.” The prospect sends a shiver down my now twisted spine. We are condemned to wait, helplessly staring at the waves wondering if and when they might relent and allow us to continue our journey. The locals don’t seem too bothered, as usual. 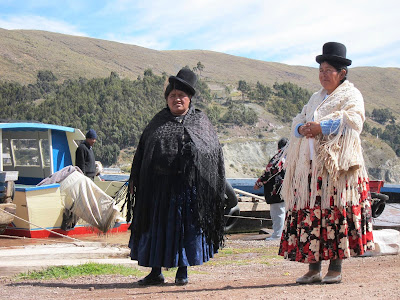 I always understood that in Bolivia, perhaps more than anywhere else in the world, money will buy you anything you want. But no; the coastguards have no price. I am presented with a golden opportunity to test my resolve and not stress or worry about things beyond my control. And this is definitely beyond my control. I mean, if throwing money at it doesn’t work, in Bolivia of all places, then I’m fresh out of ideas. After a few hours lying under the blazing sun, amidst admittedly delightful surroundings, an American guy drawly remarks; “I really appreciate the innate beauty an’ all, but would it have killed them to build a bridge?” 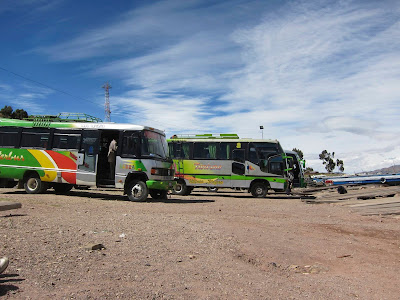 Four hours after we arrived, and a boat attempts the crossing. Successfully, which is cue for the rest of us. Or is it? The coaches nudge optimistically towards the ramps, but the barges aren’t taking the bait. Luckily the smaller boats, that aren’t attempting to float huge buses across a stretch of water (that is now unquestionably a lot choppier than it was this morning) on planks of wood, have started ferrying passengers across. We abandon ship, get our gear from the roof rack and join the rush. 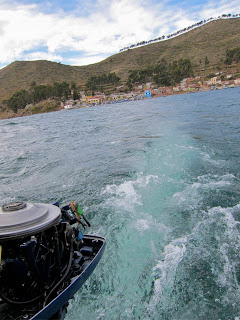 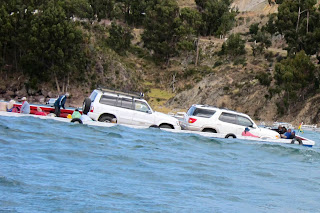 Despite being an incurable chicken when faced with the merest sniff of danger, and my hopelessness at swimming notwithstanding, I’m actually okay on the water. But they were right. It is choppy. Our tiny craft is thrown about for ten hilarious minutes, a few people looking pretty scared and tenaciously gripping the sides. But if we were in our bus on one of those things, I would be shitting myself with fear. 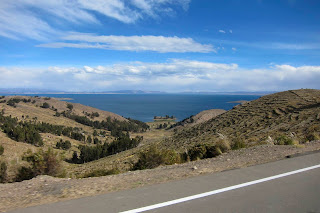 Eventually on the other side, we cram into a local minibus and begin the final leg of our journey to Copacabana. The scenery is extraordinary, but we’ve earned it. Laden with bags, I walk a few blocks to my hostel and find my room still available. I take a hot shower, power nap, and drink a cold beer looking down over Copacabana as the disappearing sun bathes it in golden light. A couple of guys are playing cards on the table next to me. They stop and we chat. After a while, the Kiwi asks, “You know how to play shithead mate?” And in the joyous hours that followed, I almost forgot that I could no longer move my body.
Posted by Joe at 19:43