I hadn't expected to be woken by the sound of gunfire this morning. But I was. It was accompanied by a lot of shouting, chanting and police sirens, and in Bolivia, that can only mean one thing. (I should probably stress that it was the sound of gunfire, and not actual gunfire...)

Demonstrations are a part of everyday life here. I'm keen to get out there and see what's going on but, ever the intrepid traveller, I need my breakfast first. By the time I've broken my fast (great granola and queso creollo) then taken a long shower, the excitement seems to have dissipated. I take to the streets myself, instead, in silent protest.

I'll admit to being a little bit nervous about coming to La Paz. It's very different to the westernised cities I've been frequenting so far, and I was worried about being out of my comfort zone. I needn't have been. Sure, it's completely different; a whole world apart. But I love it. 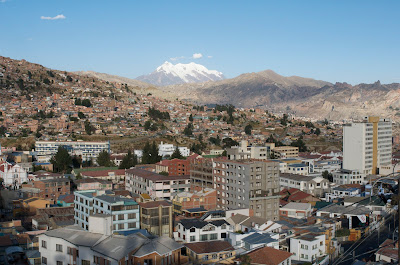 The pavements bristle with activity. Women in bowler hats man little stalls or blankets laid out with goods. Food is on sale everywhere; soup, empanadas, bread, vegetables. Barrows are full of oranges and grapefruits, all peeled and ready to be squeezed. In amongst them, the men ferry impossible loads up and down the steep slopes. Taxis, buses and minibuses cram the roads, they hoot and shout their destinations from the windows. The place is so real and alive. Colour, energy and excitement pour forth; it adds up to an incredible assault on the senses. But somehow, despite all this, I can detect a very deep sense of calm. It's all just a part of life here. 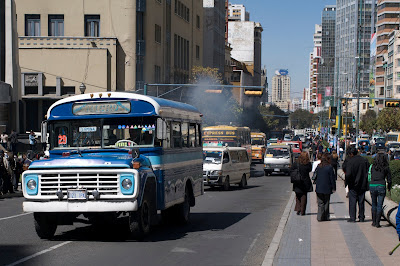 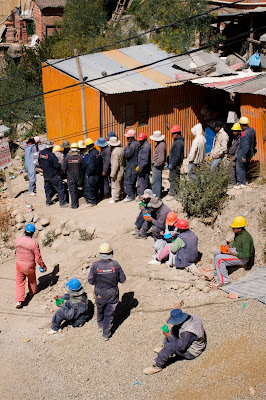 I walked about, intoxicated by it all, but also feeling the pinch of the soroche (altitude sickness). I got some pills to ease me along, and wandered aimlessly. You can't get lost in this town - wherever you are, head downhill and you'll hit El Prado, the main street. It reminds me so much of Morocco. The busy twisting roads, the bustle, the shops and the shopkeepers; everything overflowing onto the street. A guy handing out flyers walks past. I catch a glimpse of a word on the paper and run back after him. It's for a restaurant called Marrakech.

I wander for a while, and grab some food in a little bakery. (Later I will buy the best bread I have eaten all year off a girl on the street for less than five pence). Eventually the headache pounds me into submission and I retreat to the hotel for a siesta. I'm soon out again though. This time I head away from the main streets, and let my eyes lead me. Via a great street market (with no gringos) I drop down into Plaza San Pedro, home of the famous prison that was once a tourist attraction*, before climbing up the other side of the valley.

The soroche pills are working their magic and my fingers are tingling, pumped full of blood. Fortunately my other extremities seem normal enough, because at the top of the hill is a little kids playground from which you can see the whole city. I descend, only to have to climb once more, and walk the east side of the Prado. Which is when I hear, and see, the demonstrators again. 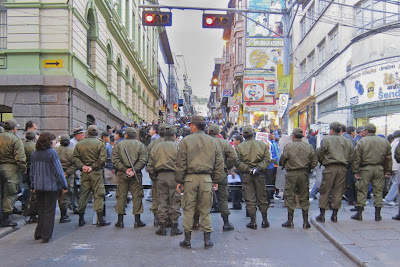 This time I investigate. It's hilarious. There are police everywhere and thousands of people are marching. A few bonfires have been lit and flares and firecrackers are going off all over the place. What to me is the cause of great excitement is just another minor event in the course of their day. People wander in and out of the police cordons on their way home from work, and when I get stuck the other side of one, I just wander alongside the marchers until I can drop away again. Now I'm one of them, maybe they'll wait until I've finished my breakfast tomorrow. 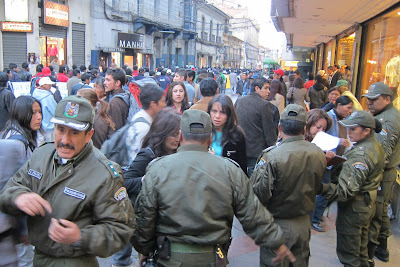 *There is a book, entitled Marching Powder, written in the first person, by an Australian, about an Englishman incarcerated in San Pedro Prison for smuggling cocaine. Don't read it. It is incredibly badly written. I only kept reading it in the hope something bad would happen to either of them. It didn't.


**I can't believe I have started writing footnotes on my blog. Does anyone know how you do those little numbers in the corner?
Posted by Joe at 19:27