It started moving just after eight. A slow, rolling movement. Like mercury in a child’s puzzle. Or a drop of rain trickling down the window pane (there would be plenty of that later too). Some people were in its way. They got out just in time. Others saw it coming: stopped, waited. As soon as it had passed, they rushed back into the space it so briefly occupied, and carried on as if nothing had happened. Some of them, especially the children, waved.

One hundred and eighty kilometres lie between Puno and the Imperial City of Cuzco. The train is the most expensive, and the slowest, means of traversing them. But it is also the coolest, and the most scenic, and ten hours on a train beats eight on a bus. Even if it does cost a whopping $220. 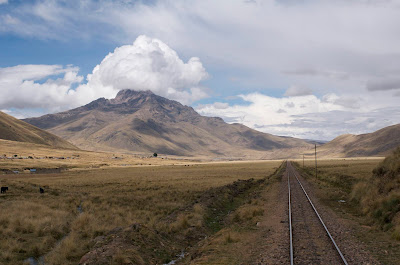 The cost should have hinted at the demographic; no Agatha Christie cast lists today. There are eighteen passengers in total. Unsurprisingly, I’m the only solo passenger. There are a couple of honeymooners by the looks of it, and the rest are all the wrong side of 50 and on inheritance sapping organised tours. I start to feel a little uneasy.

I feel worse when they break out the “traditional” Peruvian music and dancing and everyone watches clutching their complimentary (knock it off the 220) Pisco Sours. I stay in my carriage reading. I can’t reconcile myself to this sort of parading of “tradition”. It smacks of bullshit. I bet the Incas didn't break out the windpipes when the conquistadores came over the God damn mountain. I'm happy to preserve my anonymity behind my battle scarred panama.

We stop in the middle of nowhere to allow the train coming the other way to pass. A lady is running down the tracks after us in the rain, child on her back, hands clutching toy llamas. There is some interest amongst the old folks. A Dutch couple ask how much. "Cinco Soles Señor" (About £1.20). "Tres", he replies. I look up from The Book Thief to make sure I heard correctly. I did.

My anonymity discards itself and I tell him what I think. He informs me that you have to haggle in this country. We’re not in a fucking carpet shop and I didn’t hear him haggling when he willingly coughed up ten Soles to Peru Rail for a Kit Kat. $440 for him and his missus to take a train and he wants to haggle over fifty cents with some poor indigenous girl trying to make a crust selling stuffed llamas. I offer to pay the extra two Soles, tell him to grow some manners, and we leave it at that.*

The rest of the journey passes without incident and I get to hide behind hat and book. It is excruciatingly uncomfortable of course. I have bunged myself up with Loperamide again, but now the back is in the ascendancy once more. Chatting with one of the stewards, he tells me there is a quiropráctico in Cuzco. He might not know it yet, but he just made a new best friend.

I'm going back to the waving children for a minute. Why do people wave at trains? I did it as a kid, for sure, but since my ninth birthday, I can't say I've been much of a waver. I actually find it quite awkward. Embarrassing even. But that probably says more about me than it does about waving. Well now I have a captive audience. Ten hours, one hundred and eighty kilometres. That's a lot of little Peruvian kids to wave at. Halfway in and I'm addicted. I somehow manage to abandon the feeling of looking ridiculous (I should be used to it by now) and feed off the pure joy it brings to the soul. 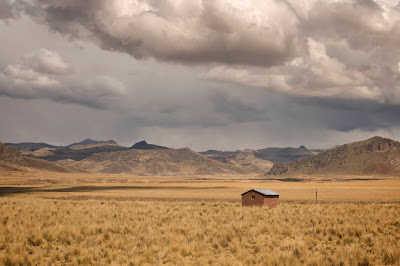 Or maybe I'm just trying to alleviate my guilt. A train belching out untold pollution is carving through the Peruvian countryside carrying eighteen gringos with more money than sense. I feel like a tourist. A real card carrying tourist. A phoney. The view might be great, but the sense of hypocrisy is greater. This little cocoon of pointless indulgence, snaking its way through the honesty and integrity of the Peruvian people and somehow stripping something away in its wake, leaves a sour taste in my mouth. No amount of waving quite manages to wash it away.