One day, many changes

Just after 4 o’clock this morning, when I emerged wearily from the door of my hotel, there was a distinct chill in the still air of Santiago, not to mention thick fog. I watched my two bags be stowed in the trunk of a taxi, before following them into the warmth and beginning, what felt like at least, an important part of my journey.

By 6 o’clock, a diminutive aeroplane was powering off into the invisible night. I watched as the city of Santiago, mapped out by flickering orange lights, emerged from the darkness below then promptly disappeared again beneath a blanket of thick cloud. At night, there is little to be seen of nature, save for the stars.

Shortly after that, to my right, the first embers of the day began to glow, and night slipped quietly away on my left. Nowhere else on Earth are we quite so reminded of our daily rotation. Below, the clouds dispersed to reveal the Pacific Ocean lapping at the fringe of the empty Atacama Desert, the driest place on Earth.

Having divested ourselves of most of our passengers at Iquique, we took off once more and headed inland. The arid desert is broken at times by old riverbeds that seem to retain enough moisture to allow themselves to be cultivated - little patches of coloured fields wind their way into the barren landscape. 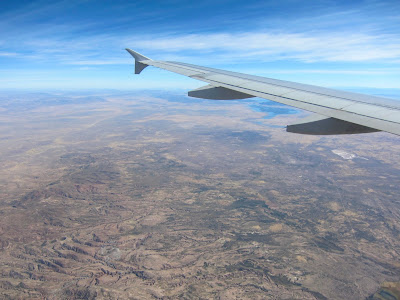 Without ever really seeming to make a descent, we landed at La Paz. We had taken off from Iquique, on the coast, and climbed to cruise at around 10,000 metres. La Paz airport, in El Alto, is the highest in the world at over four kilometres above sea level. The ground reaches up to claim us so much as we descend toward it.

This can cause a few problems. The best way to deal with altitude sickness is to climb gradually and acclimatise. I drop in out of the sky, and it is tough going at the airport. Luckily, downtown is a good 400 metres lower, which helps. As we drive towards it, I get my first glimpse of the city. It is clinging unfeasibly to the sides of an enormous canyon, under icy peaks, and it looks incredible. 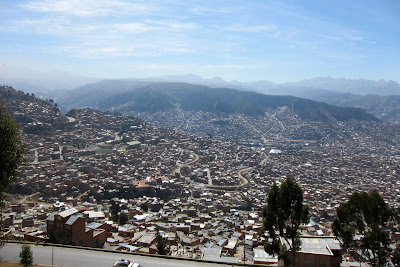 I take my time walking about town getting a feel for the place but not wanting to over exert. I've known all along that today would mark a change; a new phase in my adventure. That the journey should be filled with so many contrasts to emphasise this was an unexpected bonus. The last thing I want to do is get ahead of myself, so I follow the local advice; camina lentito, como poquito y duerme solito (walk slowly, eat little, sleep alone). The rest can wait until tomorrow, and a more civilised hour.
Posted by Joe at 19:51