Most backpackers are in Copacabana in order to visit Isla del Sol, the birthplace of the Sun itself in Inca mythology. Which may go some way to explaining the extraordinary number of crusties in town. 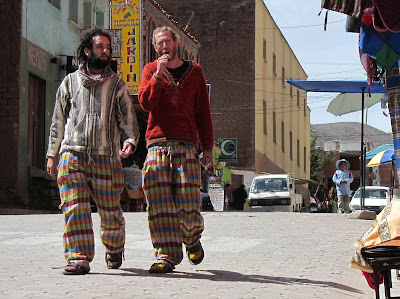 Wrong
For the last two days, the lake has been too rough for the boats, creating a backlog of eager backpackers (backlogpackers?) trying to get out to the island. I arrive on the one thirty boat fractionally too late to take a prime seat on the roof, so I’m forced onto the main deck, where school chairs are screwed to the floor. It fills with a pungent mix of malignant soap dodgers, crazy Dutch guys, pasty Paddies, some weird Japanese dude and posh English girls roughing it for the first time. Ten minutes before we are due to leave, I realise I can’t deal with it and decide to jump ship. I almost get to the back of the boat before reason takes hold. I stop and sit down. What a tit. Trying to bail on the only chance I will probably ever get to visit such an important Inca site. Chickening out just because I don’t like crusties.

I try and get comfortable in my tiny seat, and not become irritated by the bloke in the stupid hat playing the bongos. Or the jugglers. Or the people in striped trousers. Or the public schoolboys dressed like Robinson Crusoe. But it’s not happening. I make an executive decision. I leave. Immediately. Three hours on that boat for forty minutes walking around part of an island? Seen one you’ve seen them all right? Wight, Man, Dogs, Sun. And I mean, it’s not like the Incas were right anyway, is it? 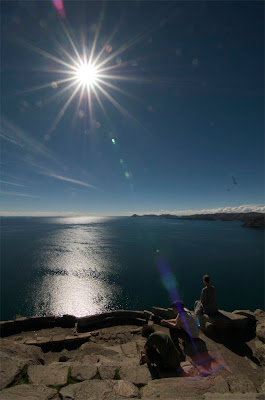 The Sun. Came out of a small island apparently
An hour or so later I am making my way up Cerro Calvario, past the fourteen Stations of the Cross. In the distance, I can make out the wakes of the tourist boats, and I thank the Lord himself for sparing me. It's hard work getting up there, with the altitude and my back, but I take my time and stop to say hello to the occasional local on his way down. At the top is a row of crosses, and some of the most incredible views I am yet to see. It was so worth it. 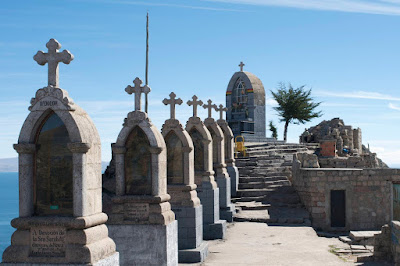 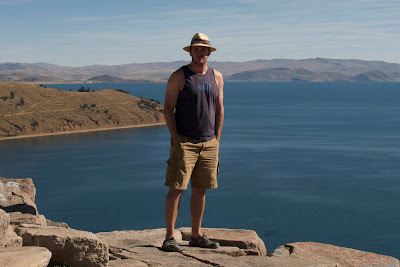 Walking up a hill named after the Lord’s last mortal journey, admittedly unladen, but with my back in its current condition, was probably a stupid idea. But in a genuine miracle, it appears to do the trick, and by the time the sun goes down I’m taking my socks on and off just for the fun of it. Not to mention congratulating myself on my unquestionably wise decision to abandon ship and spend the rest of the day enjoying Copacabana, minus a few dozen crusties.

I have a bus to Puno tomorrow lunchtime, but I don’t really want to leave.
Posted by Joe at 20:40