An Englishman in Santiago

I’m not normally one for gawping out of aeroplane windows, but the view of the Andes flying into Santiago de Chile was spectacular. As we approached our destination, I got my first glimpse of the famous pollution. The hazy smog drapes itself over the city like a dirty old blanket.

When I first arrived in Buenos Aires I felt scared and alone. I didn’t know anyone, couldn’t communicate and for a few days I had no confidence whatsoever. But it became my home. Whenever I went away, I knew I had somewhere to come back to. I don’t anymore. The next month is all about moving, and I’m a little unsure how I feel about losing that security.

Staying in the Paris Londres neighbourhood should help me feel at home. I check into my hotel and stride out into downtown Santiago, but I’m not my usual self. There’s just a hint of trepidation and an absence of swagger. I find myself inadvertently climbing Cerro Santa Lucia, a beautiful park on a steep hill, complete with winding paths and steps and entwined lovers on every available bench. 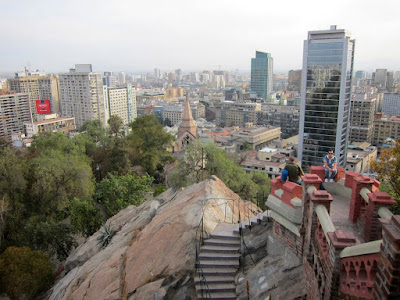 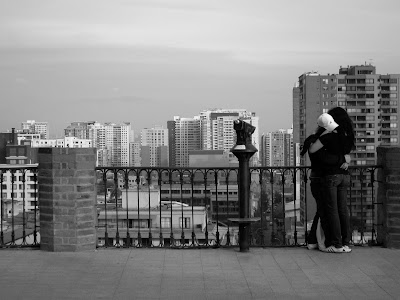 Down the other side I stop for a coffee and make a rather nasty discovery. I cannot understand a single fucking word anyone is saying, and they can’t understand me either. Fortunately for me, espresso and muffin are pretty much universal. But little turns of phrases, things I’m used to, they’re gone. With this shadow looming over me, I suddenly find my Spanish dropping a few notches. I forget words and start stuttering like Gareth G-G-G-G-Gates.

A few blocks and I’m in Plaza de Armas. Tables are laid out for chess, and a hundred or so guys are either playing or watching. Elsewhere a big circle is watching two blokes acting out a comedy, and rows of artists are painting away and displaying their work. It reminds me of Morocco - Meknes maybe. And Salta too - people are just hanging out and taking it easy. It’s exactly the kind of place Buenos Aires needs but doesn’t have. 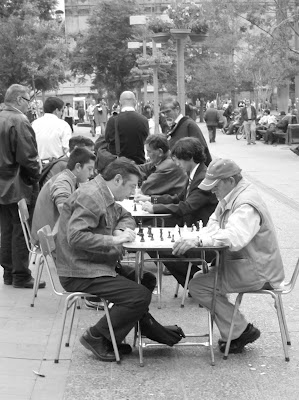 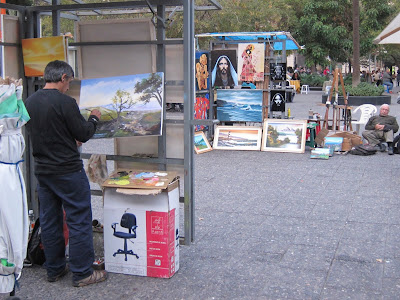 I head home, regroup and start thinking about dinner. But since I left my Spanish on the wrong side of the Andes, I no longer feel confident getting in a taxi. And taking the subway becomes suddenly more daunting too, especially since I don’t have a clue where I’m going. So I opt to stay local. Which is a big mistake.

I’m right in the middle of town, which shuts down at night. I walk in circles for blocks and
blocks looking for somewhere to eat before hunger forces my hand. I plump for some Italian place that looks like a Travelodge from the outside and a Harvester from the inside.

The food is indescribably bad. I order two large gin and tonics to let my sorrows swim around in, and sit staring out of the window castigating myself. What a loser. Dining alone in the shittiest restaurant in the southern hemisphere because I was too frightened, lazy or stupid to jump in a cab and go somewhere else. Thank God I have another ten months in which to pull myself together.
Posted by Joe at 19:25