Nobody wants to arrive in a new city in darkness. You need daylight, a chance to look around, get your bearings. That's why I booked myself on the 9:30 bus from Santiago to Mendoza this morning. Waste of time. 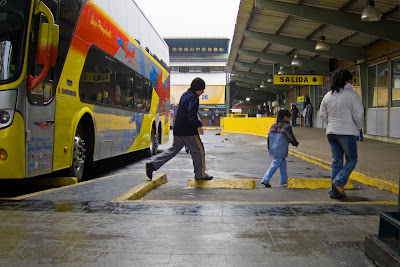 Things get off to an unpromising start when it's delayed by 45 minutes. When I do get on, my seat is flooded (it rained last night) and the conductor's efforts to mop it up with a crusty towel are in vain. By the time we hit the road what looked like a nice day is turning decidedly cloudy, as in, the pollution is so dense that I can't see the traffic lights changing from red to green. Oh, they're not.

As we gain altitude, we gain clarity. It is a beautiful day after all, and we wind our way up into the Andes, with snow covered peaks, hairpin ascents and popping ears. Then we stop, inexplicably, for an hour. I would normally get annoyed at this juncture, but what's the point? I keep reading and make polite 'conversation' with my neighbours, who all work for the Argentinean Red Cross. After crossing into their country via a long and exhaust filled tunnel, we stop again at customs. And we don't move. For three hours. 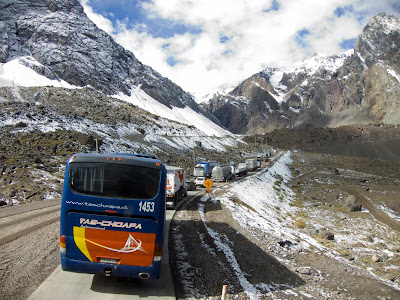 Nice view but it gets boring after a while

I doubt Franz Kafka ever made this border crossing, but the faceless banality of its bureaucracy might well have inspired another novel if he had. After sauntering around for an hour like exercising prisoners, we form a long line for the two passport stamps and have our bags examined in scenes reminiscent of Schindler's List. Despite poking about in my rucksack with a small torch, they still don't find the hazardous socks, or even bother to enquire as to why I am smuggling tea bags of mate into Argentina. 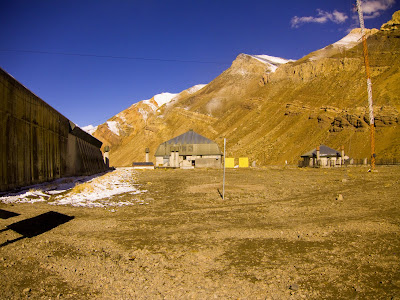 Snapped through my new sunnies while I wait to be 'processed'

When we finally hit the road, I console myself with my book (Lunar Park - awesome) until they turn the lights out and I am left with nothing to do. I take long exposure shots of oncoming lorries in an effort to stave off the boredom but my head is pounding like a bastard and I desperately need a beer. When the orange glow of Mendoza finally materialises on the dark horizon, I am chewing my arms off with hunger. 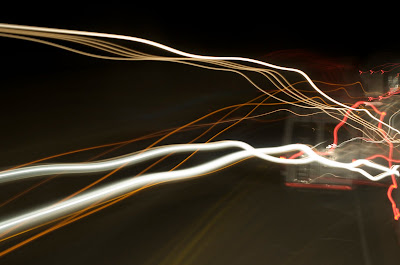 We eventually arrive in Mendoza, eleven hours after we left. The hesitancy and insecurity of Santiago is long forgotten as I stride purposefully off into the Argentinean night to hail myself a cab. A man on a mission once more.
Posted by Joe at 19:55