For a city I have inhabited for the last eleven weeks, I have had curiously little to say about Buenos Aires. Maybe that's because I can't quite make up my mind. I will atone for that now by saying everything there is to say, and more, in one post....

It is a city of sharp contrasts. At times European in character and appearance, yet defiantly South American too. Lavish and luxuriant, but poor and destitute. Beautiful on one hand, ugly on the other. Like all big cities, it feels crowded and polluted. People don't look that happy, though if you manage to engage with them you normally find that they are. Their character reveals itself in different ways.

Ten years ago, the Argentine Peso and the US Dollar were worth the same. Now they're about 4 to 1. In the economic crisis of the 90s and early 2000s, Argentineans had their life savings devalued by around 80%. In the heart of the crisis, the streets were full of cartoneros - guys pushing big wheeled carts around, sifting through rubbish looking for anything recyclable or reusable. There are still plenty of them about.

On every subway train, someone is selling something. They make their sales pitch to the whole carriage, then walk up and down leaving their wares on people's laps, before collecting them again, and hopefully making the odd sale. Can you imagine this in London? It's impossible. Here, no one would dream of stealing from someone trying to make a living in this way.

You can't walk two blocks without being offered a pair of socks. Or having an extensive range of bootlegged DVDs to peruse. Or having a splat tomato demonstrated to you, or tripping over a couple of hundred mate gourds, fake Ray-Bans or mobile phone covers. But no one is really trying to rip you off - just selling something for a fair price. 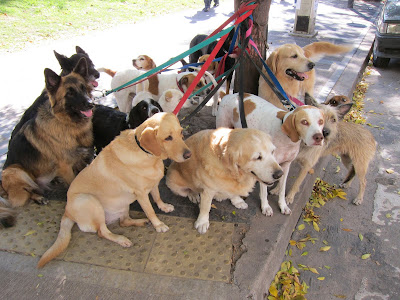 Professional dog walking is a mainstream industry
There's still daylight robbery of course, but it's perpetrated less by pickpockets or muggers as by the swanky boutiques and hotels of Recoleta and Palermo. Across the railway lines from Recoleta, where top European brands peddle their overpriced luxury goods whilst mothers and babies beg outside, is villa 31, what we might call a shantytown.

There are plenty of villas miserias (literally miserable towns) dotted around the city. Villa 31 is the most central, right next to the main Retiro bus station. Little brick rooms are stacked up on top of one another, and look like shoeboxes made of lego. It's a good job the Aires are Buenos, because they look like they could blow away at any minute. The streets are dirty and dusty. That two blocks away tourists are forking out hundreds of dollars for Gucci handbags is a lost irony.

One of the poorest central neighbourhoods is La Boca - the mouth of the river. Tourists flood down here to the caminito - a paved street crammed with bars and third rate restaurants - to photograph the colourful houses and watch tango displays. There's proper history here of course - the area was home to Italian immigrants, who decorated their homes with paint left over from their boats. Sadly, it just feels like a tourist trap now. A ring of police make sure you don't get mugged for two blocks, while the festering poverty of the rest of the area is left to its own devices beyond. I still managed to take this picture just to prove that I had actually been to Buenos Aires. 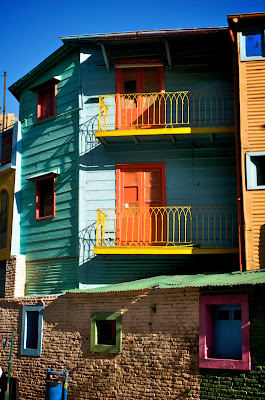 El caminito, La Boca
A little further north from La Boca is Puerto Madero, Buenos Aires' newest and most modern barrio. Swanky restaurants line the old dock, and beyond, glitzy high-rise apartment blocks and hotels reach for the sky. The architecture is fantastic - modern, dynamic and inspiring. It is the aspirational side of the city, and a glimpse of what it is capable of. Walk through all of that and you hit the costanera, where the carritas flog choripan to the normal people. I like it along here - in the shadows of the high-rises, a little bit of the real Buenos Aires. 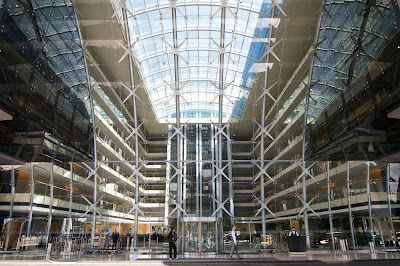 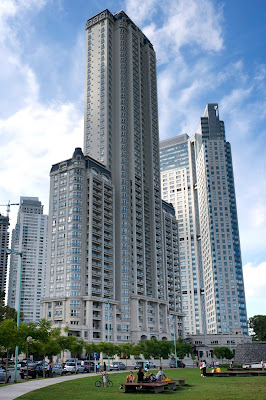 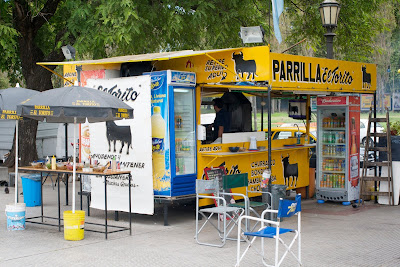 Carritas de la costanera
Downtown is pretty snide. In the way that Oxford Circus to Tottenham Court Road is pretty snide. Away from the tourists, money changers, cheap tat shops and bogus electrical retailers, there are a few nice areas. 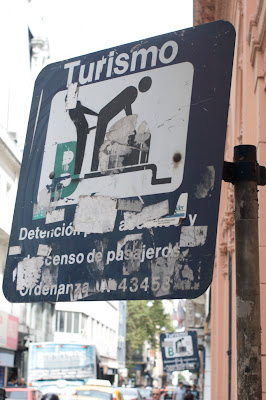 Tourists - you have been warned
Plaza de Mayo is the centre of town, and home of permanent protesters and war veterans. During the dirty war the famous madres de plaza de mayo congregated here to protest against the disappearance of their sons under the military government. Their symbol of a white shoal is painted all over the ground in tribute to their remarkable courage. 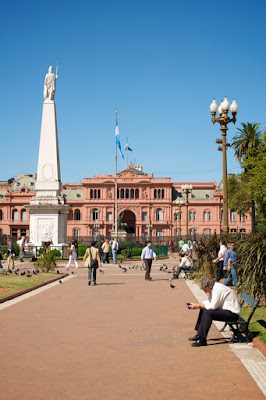 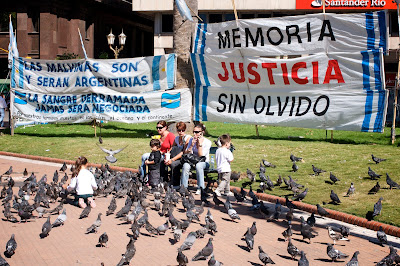 A few blocks south of the centre is San Telmo, my favourite neighbourhood. The narrow cobbled streets still bear the remnants of the old tram tracks. Crumbling buildings, traditional cafes and antique shops sit side by side. It was, and still is, one of the poorest barrios, but its cultural wealth draws in the tourists. It has a slightly edgy, real feel to it. Graffiti and murals hang off every wall. It's the kind of place where novels are set. And written. 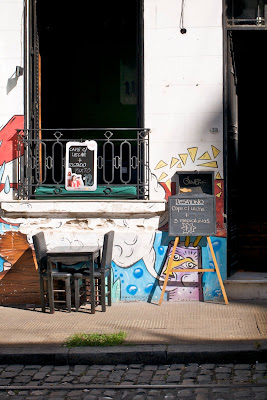 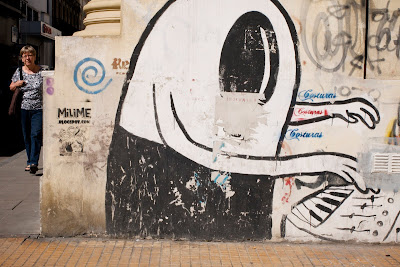 Every Sunday San Telmo throbs with a huge feria, or street market. The usual rubbish nestles in amongst antiques, paintings, photographs, handmade toys and clothes, whilst the tourists rub shoulders with the porteños. Impromptu tango shows erupt all over the place, kids display their accordion playing skills and little old men break hearts with their gentle guitar strumming. 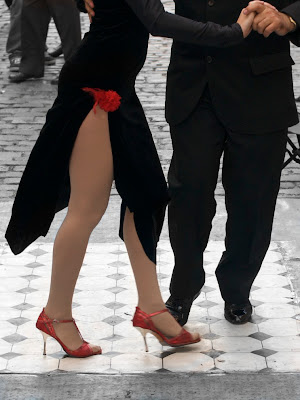 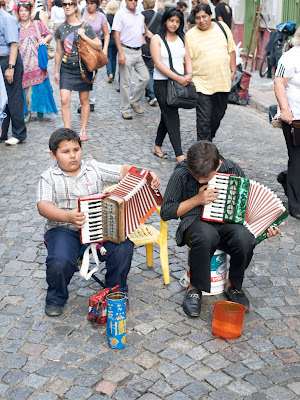 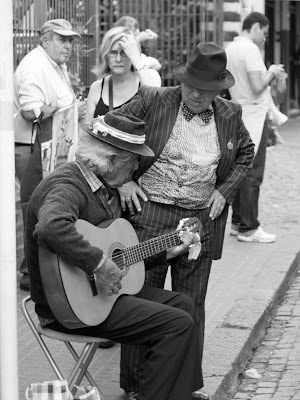 Other parts of town, most notably Palermo, where I have been living, feel a lot more European. At its best, the city can be very stylish - a bookstore in an old theatre, a giant flower sculpture with petals that open and close with the light. Colourful, wild buses that never quite go where you expect them to. The streets buzz with activity, not to mention traffic. At its worst it can be filthy, stinking and claustrophobic. 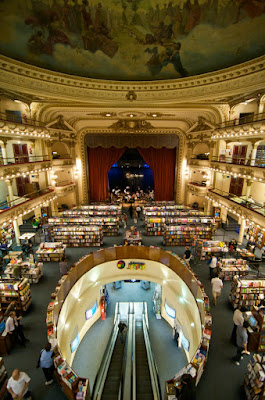 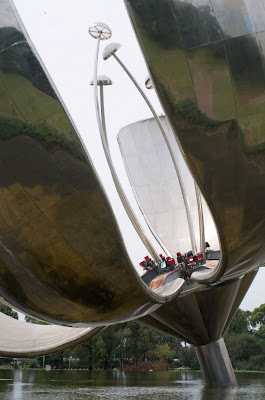 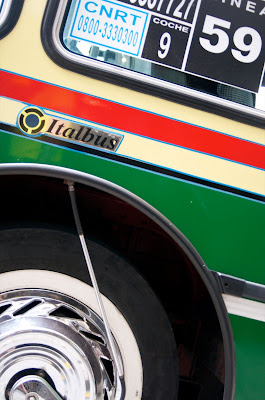 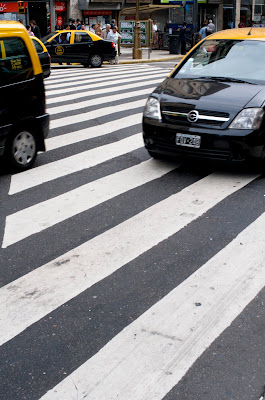 In amongst all the mayhem, dog turds and contradictions, are a few little sanctuaries. They mostly take the form of cafes, where one can while away the hours sipping occasionally bearable coffee and watching the world go by. It's hard to imagine the place without them, and you kind of know the other people are in there for the same reason; to take refuge. 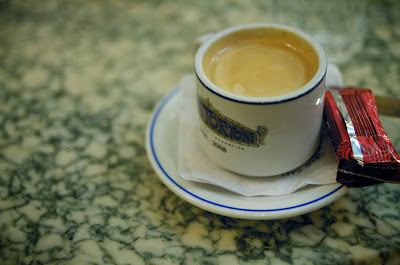 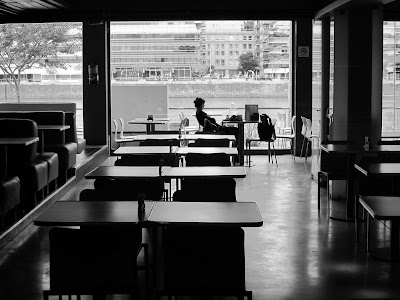 Towards the end of the 15-hour flight from London, the Captain announced that we would shortly be arriving in "Beautiful Buenos Aires." At times, I can see his point, at others, less so. Part of the city's appeal is this paradox - you need to constantly shift your perspective in order to see it as a whole. If you stay still, it will grow old on you quickly and lose its charm. Keep moving then - for me that means leaving of course. Tomorrow. Like all good things in life that we take for granted, I know I'm going to miss it once it's gone.
Posted by Joe at 07:45