My friend Steve lived in Quito for a few years and furnished me with some pointers. Here’s what he said about Quito old town:

The old town is pretty far from most stuff and also pretty dodgy. Quito is pretty dodgy in general actually - every time you go out you have to prepare for the fact that you might get mugged, although you rarely do. It's a bit like Holloway Road in that respect.

Fortunately, that's where the similarities with Holloway Road end. The historic centre of town was the first city to receive UNESCO heritage status, in 1978. (Holloway just missed out). It is considered the best preserved colonial centre in Latin America. Magnificent churches and cathedrals are on almost every corner, and the narrow streets climb up and down and disappear into the sides of the hills that surround the town. 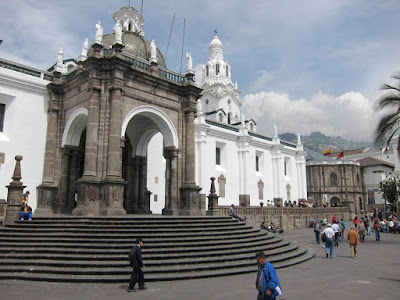 They keep the cars out of the centre on a Sunday, so I took the opportunity to run the gauntlet and have a stroll about. It's not just the cars it seems - despite the fact that there are hundreds of locals wandering the streets, most of the shops and cafes are shut too. I find somewhere to eat in Plaza San Francisco, and am amazed to be served a very yellow looking ceviche, flavoured with sweet mustard. I guess it wouldn't do if we were all the same. 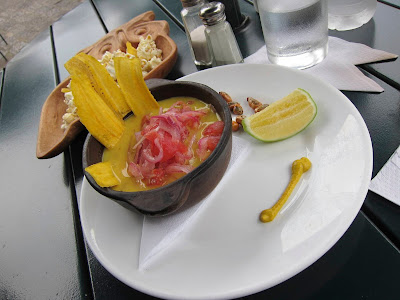 Even on a busy Sunday afternoon, I can see what Steve meant. There is a slight edge to the place, a lurking menace that you can't quite put your finger on. Much later, I head out for dinner. The streets are deserted, all the restaurants closed, and the sense of impending violence sharpened considerably. If I wasn't six foot one and as hard as nails, I might even be a bit worried. I pop back to the hotel to research alternative dinner plans, and the guy looks at me as though I am mad. Toma un taxi señor.

Things are a bit better today. Everything's open, the streets are lively, loud and busy and the lingering mist of danger has evaporated. And in Plaza Grande, some sort of Independence related celebration is occurring. 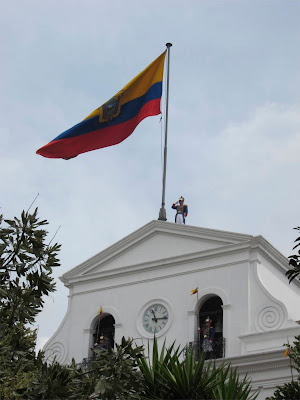 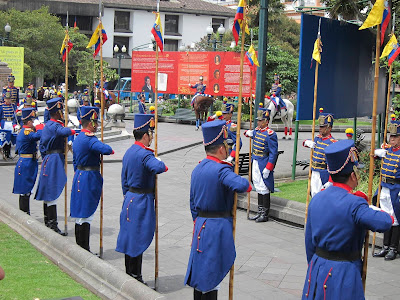 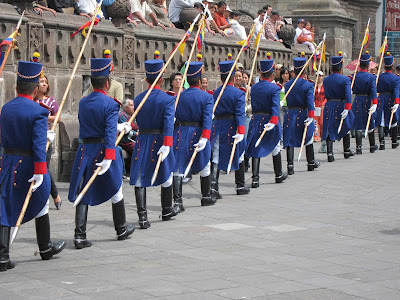 It's not a bad place really. I like it, but I'm probably a little bit too tired to make the effort to appreciate it. Today is my last day in Latin America. It's been an awesome few months, and I know I need a lot more than that to really do it justice. But there's a grand 'plan' scribbled on a piece of paper somewhere in amongst all the crap I'm carting around with me, and it is quite insistent. On June 1st, it says, I have to swap continents.
Posted by Joe at 14:07

Email ThisBlogThis!Share to TwitterShare to FacebookShare to Pinterest
Labels: Ecuador