Welcome to the Jungle

I'm a bit of a pussy when it comes down to it. I like to be comfortable. I don't like strange creatures nibbling away at me; mosquitoes, snakes, beetles, hirsute caterpillars. So when I woke up yesterday morning, I was really thinking about ducking out of my two day jungle trek and hanging out in Chiang Rai instead. Thankfully, something deeper than all that won the day.

After an hour or so in a boat up the Mae Kok river, twenty minutes on the back of an elephant and a couple of hours of uphill struggle through Thai jungle, myself and Woot, my guide, finally arrived at Akha village, saturated with sweat, exhausted and smelling like Robin Hood's armpits. Just another ten minute walk (in our flip flops) and we were showering underneath a mercifully cold waterfall and I was trying to remember when I last felt this happy. 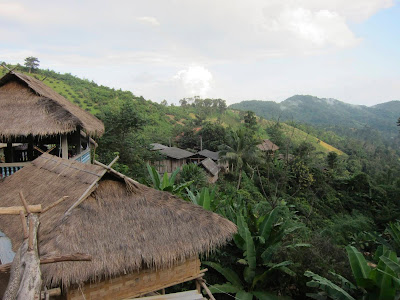 Akha Hill Village
I helped Woot and Apha, our guide for the next day, cook dinner, and in true hilltribe style, we cracked open a few beers. When the sun had shrunk from the valley, Woot asked if I wanted to walk back to the waterfall. He wouldn't go because, he said, Thai people believe in ghosts. I told him I wouldn't go because I was afraid of the living things out there, not the dead ones. As if to prove my point, a massive beetle landed between us, scaring the crap out of me. They obviously thought this was hilarious, picking it up and throwing it at one another whilst relishing my discomfort. We turned in for the night when the excitement was over, at a saintly 8pm, and fell asleep listening to the gentle sounds of the jungle, woken only by an owl perched on the roof of our hut, hooting knowingly. 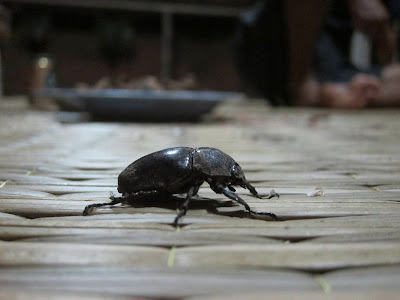 When I was a lot younger and fractionally more stupid than I am now, I would often watch the sun coming up. It's not a habit I carried with me into my thirties but this morning, urged on by a crowing cockerel, I clambered out from under the mosquito net and strolled into the village in my underpants to watch day emerge from night. 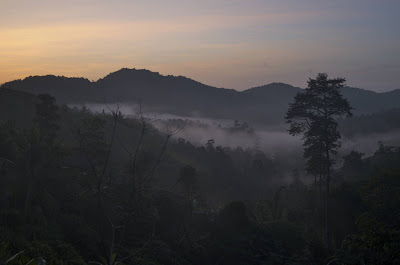 A few hours later, replenished by my twelve hours kip and four slices of toast thickly spread with crunchy Sun Pat, we're off again, back in yesterdays crusty clothes, a new "That's not a knife" knife swinging from my hip and just the jungle ahead of us. We walk, talk a little, every now and then, and sweat. Along the way we harvest lemongrass, banana leaves, shoots and tea. In a small clearing we begin on the bamboo. We make fishing rods, cups, chopsticks, plates and cooking tubes. "Jungle is like 7 Eleven", says Woot. 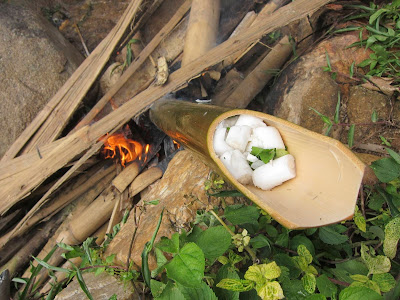 We stop for lunch, and try to fish but apparently another tribe upstream are using nets, so we're having pork. It's the only thing we've not picked up along the way, though in theory we could have raided a neighbouring village for a pig or two. Apha cooks lunch on the fire while I stroll around unhelpfully looking for things to do with my knife. 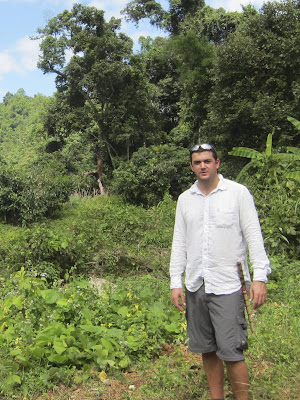 Bear Grylls? Taught him everything he knows 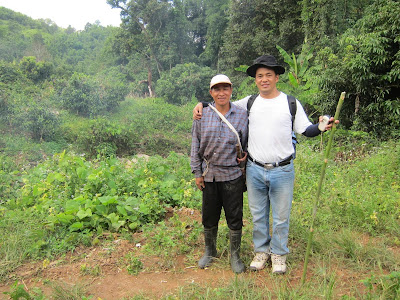 Apha and Woot
After lunch we head our separate ways; Apha back to the village, Woot and I to the Hot Springs where he left the car, twelve kilometres away. It's a long old walk, through rice fields, tea plantations, but we get there in the end. By the time I'm back in Chiang Rai, aching all over, with a fascinating array of new insect bites despite the 33% deet, I feel somehow different. I always look to explain things through comparison with others; best this, best that. Finest whatever since whenever. It's all bollocks.

Experiences like this neither need to be, nor prosper from being, measured against others. Rather they are the things that make you realise you are alive, that the world you live in is inherently wonderful, and that each genuinely new experience, regardless of its nature, is irrefutably greater than the last.
Posted by Joe at 09:03