More lessons from a culinary genius

There are some dishes you've eaten so many times that you start to lose interest. And they've been cobbled together, bastardised and mistreated by so many people who never really knew what they were to begin with, that they've lost interest too. Take sweet and sour pork for example? How many times have you eaten it, and just how shit is it?

The answer is that you have probably never eaten it. I hadn't either until a couple of days ago. But, back in the kitchen with my new culinary Goddess, Martha Sherpa, I ate a dish of sweet and sour pork that I'd made, to her recipe, that blew every chinese, faux-chinese, pseudo-sino plate of MSG laden bullshit I'd ever encountered in my sorry life right out the kitchen window. Why? Because it was pork, and it was sweet, and sour. 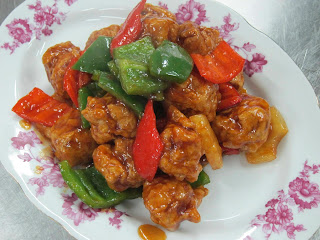 Sweet and sour pork
She didn't stop there. We made char sui - proper Chinese barbecue pork. The key to it is in how you choose and cut the meat. Shoulder, or butt, plenty of fat and nice marbling if you can get it, then three quarter inch slices, but crucially, all the same thickness, which is a lot harder than it sounds. Marinade, roast, turn, roast. Glaze. Roast, turn, glaze, roast. Glaze, dry. And there you have it. We taste each individual piece, to understand how the meat you start with, and how it is cut, affects the end result. Another lesson learned. 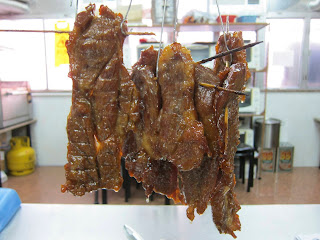 Char sui
Before all this though, we began the day by stuffing a duck, sewing up its backside with a metal skewer, pumping it full of air and painting its skin with a maltose vinegar solution. We then hung the poor bugger by his neck in front of a fan to dry out. 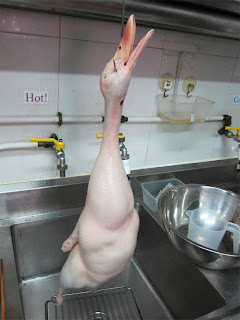 Pre-roasted duck
Later he would suffer further indignation when, having been roasted in the oven and sufficiently rested, he found himself on the wrong end of my cleaver. The Chinese don't carve, they chop. The entire bird, carcass and all, is hacked into bite-sized pieces. I get the hang of it after a while, using the heel of the blade and growing in confidence. The final test - chopping his head in half, which I amaze myself by ace-ing. 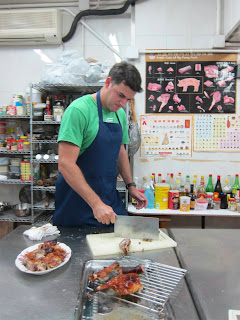 A deadly chop to the head
Martha fills the time between all the marinading and roasting with some wok skills. Hong Kong fried rice and Singapore noodles. (Actually they're Singapore noodles Hong Kong style, begging the question, why not call them Hong Kong noodles, but never mind). I've used a wok before, but never properly. She shows me how. A wet towel (so it doesn't burn, never mind your hand) in the left, spatula in the right. Wok angled at almost 45º so the contents slide back down into the centre. And turning, left side, right side, never in the middle. As you work, things slip out of line, and Martha is on hand to reprimand you. The result, unlike my technique, is undeniably great. 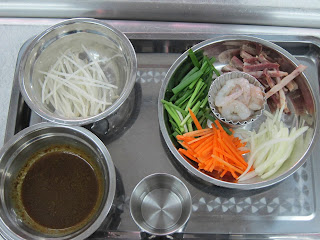 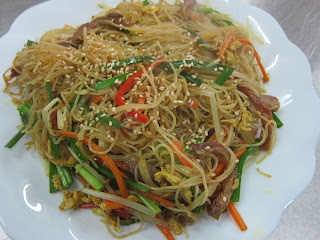 ...and after
I've always known I could re-route my round the world trip if I wanted or needed to, but had privately resolved not to. I could never have guessed that a stern but likeable Chinese lady who makes me re-slice my ginger and pick tiny morsels of minced pork off the walls would be the one to do it, but she did. Singapore is out and a return to Hong Kong is in, just for one more afternoon in her kitchen. Or is that Hong Kong, Singapore style? I guess I'll never know...
Posted by Joe at 07:58