"The best Mexican food this side of the border" read the sign. Which would be fine, except they're talking about the border between Thailand and Laos, otherwise known as the Mekong River. I resist the temptation, and spend my last night in Thailand eating barbecue with the Chiang Khong locals instead.

Natural borders make so much more sense than man made ones. Rivers, mountains, seas; these are the things that should divide people, not lines drawn on maps by distant men. Slumped in my hammock looking out across the river to Houy Xia and listening to the faint music drifting across the river, I wondered how different it could really be.

An understandable duality shrouds you when you stand on the brink of something. A border or cusp, real or figurative; leaving one thing behind, entering another. Reflection, anticipation. It might actually be the greatest thing about travelling, moving from one place to another, body and mind constantly charged and energised by these changes. And not just travelling but life, too, come to think of it.

As I mused over these things, an apparition began to materialise above the opposite bank of the river. A warm yellow glow climbed reticently from behind the landscape, winched into the sky by an invisible hand. It took me so long to realise that it was the moon, as I sat transfixed by it, that by the time I reached for the camera, it had risen quite quickly and the sun's distant glare was shimmering off its dimpled skin, suffusing the dark night. 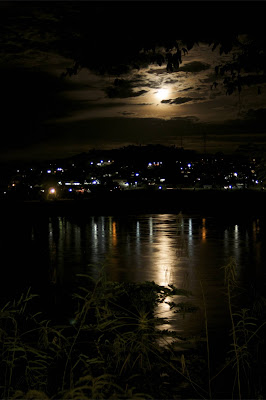